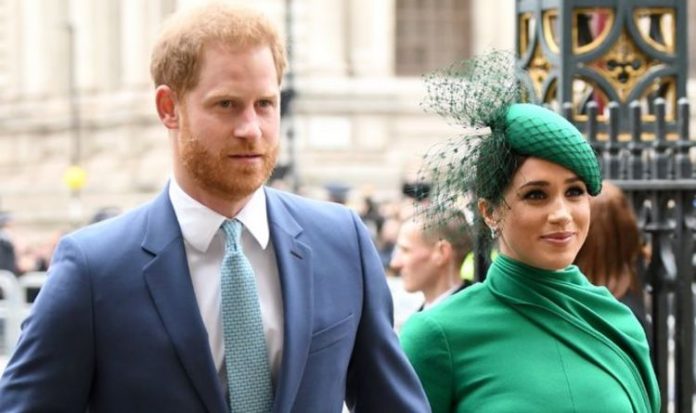 The Duke and Duchess of Sussex are living in America after quitting as senior working royals last year. Harry reportedly plans to visit Britain in the summer for Trooping the Colour and Prince Philip’s 100th birthday if coronavirus restrictions allow.

But Meghan is said to be unlikely to accompany her husband.

Royal author Nigel Cawthorne warned if the former actress chooses not to join Harry it would “hang like a dark shadow” over the royal events.

Mr Cawthorne, author of Prince Andrew: Epstein and the Palace, told the Daily Mail: “Travel under the current circumstances is for anyone a daunting undertaking.

“Travelling back to the UK to see the Royal Family, will be far more of an emotional necessity to Prince Harry than for Meghan.

“Doubtless, she will make an effort to attend the birthday celebrations of the Queen and Prince Philip in April and June, should the Government’s coronavirus rules allow any.

“If she decided not to attend for no reason it would indeed be a snub to her royal in-laws and mark a nadir in the relations between the Royal Family and the Sussexes.

“It would be a public relations disaster that would hang like a dark shadow over the celebrations.”

Meghan and Harry have set up home in California with their young son Archie.

The Duke of Edinburgh also reaches his 100th milestone that month.

The newspaper cited sources as insisting Meghan’s absence would not be a “snub” to the royals.

An insider said: “Harry wants to come back for The Queen and Prince Philip’s big birthdays. But it looks likely it will be just him.

“If Meghan comes back, the feeling is that it would overshadow the occasion. People would only be looking at the ‘drama’ of it all.

“Of course she would be welcome, but a decision not to come would postpone that headache for a while at least.”

The Queen’s grandson and the ex-Suits star announced plans to step back as working royals just over a year ago.

They officially ended royal duties on March 31 after a last round of engagements.

Their final appearance alongside Prince William, Kate and other royals at Westminster Abbey for the Commonwealth Day Service was visibly awkward.