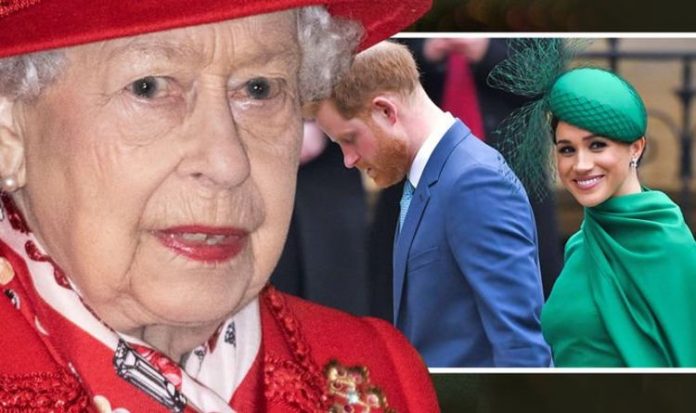 Channel 5’s royal documentary: ‘Prince Harry: The Troubled Prince’, reflected on his life within the Royal Family and outside of it with Meghan Markle. Royal commentators Camilla Tominey and Angela Levin remarked on Meghan Markle’s inability to fit into the Royal Family. Ms Levin insisted the Duchess of Sussex had no sense of duty, but this was understandable as she had never been a member of the Royal Family.

Ms Levin also reflected on Meghan and Harry’s relationship as well as Meghan’s fit in the Royal Family.

She said: “Prince Harry said ‘what Meghan wants, Meghan gets’.

“I think he defers to her a great deal, she is a very confident and articulate woman who has done very well for herself.

“But I think she has no sense of duty which is understandable because she has never been a member of the Royal Family.

DON’T MISS: POLL: Should Meghan and Harry be banned from Palace balcony? VOTE

“But Meghan won’t be confined by protocol.”

Ms Tominey noted that rumours that circulated about the pair following their wedding did not help their relationship with the press.

Ms Tominey said: “The wheels started to come off amid suggestions that the couple had been a bit difficult over the planning of the wedding.

“Also that demands were being made that weren’t quite in proportion with their place in the royal pecking order.”

Starring as guests of Spotify’s Stream On event, Meghan said: “We created Archewell Audio to make sure we can elevate voices that maybe aren’t being heard, and hear people’s stories.”

Prince Harry added: “The biggest part of this is trying to create a community where you can share.

“This will encourage everybody else to share their vulnerabilities within a safe place.”