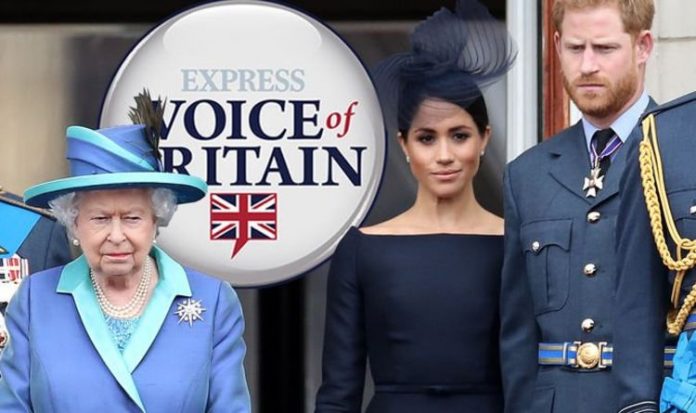 The Duke and Duchess of Sussex have not seen the Queen and other members of the Royal Family since carrying out their last engagement in the UK nearly a year ago. Harry is expected however to travel from the US in June for a long-awaited reunion with the royals for Prince Philip’s 100th birthday celebrations and the annual Trooping of the Colour, which includes a flypast over Buckingham Palace as the Queen and senior royals watch from the balcony. Meghan and Harry appeared together on the balcony at Trooping of the Colour for the first time in 2018 just a month after marrying, with the newlyweds given a prime position next to the Queen for the centenary of the RAF.

In 2019, the Duke and Duchess also delighted thousands of royal fans by taking part in the parade along the Mall, weeks after welcoming their first child, Archie Harrison.

But as the Megxit row intensifies and the couple no longer working members of the Royal Family, aides will have to decide how to incorporate them into high-profile public events.

The honour of standing on the Buckingham Palace balcony is reserved for only the Queen and her close family members, and distant relatives usually don’t make that prestigious appearance when it comes to assigning spots in the iconic royal tradition.

Now Expreess.co.uk readers have overwhelmingly voted in our most recent poll for Meghan and Harry to be banned from the Palace balcony for major events.

The poll, which ran from 9.15am until 9.30pm on Monday February 22, asked: “Should Meghan Markle and Prince Harry be banned from the palace balcony for major events?”

A huge 92 percent (5,551 readers) believe they should now be banned from standing on the royal balcony during these high-profile events.

The remaining eight percent (480 readers) disagreed, while less than one percent (26 readers) were undecided.

Furious Express.co.uk readers lashed out at Meghan and Harry, raging they should not be afforded the privilege of standing alongside the Queen on the Buckingham Palace balcony as they are no longer working members of the Royal Family.

“He has virtually the whole year to visit his family, that’s expected, but once you’re out, you’re out, and the public arena is not for the Markles anymore, otherwise there’s every chance that it would take away from the event itself.”

A fourth reader went further, and added: “Not only should they be banned from the balcony but they should lose all titles, all entitlements, and become plain Mr and Mrs.

“Where else could one resign from one’s job and still expect to get paid?”

The Queen has said Meghan and Harry “remain much loved members of the family”, but royal aides will have to decide if the couple will look out of place on the balcony surrounded by senior working royals including Charles, Camilla, William, Kate, Edward and Sophie.

A royal insider told that Harry has already indicated a desire to take part in the Queen’s Platinum Jubilee celebration in June 2022, but the source suggested his request will pose challenges for royal courtiers when drawing up plans.

They explained: “Harry wants to be there. It is already causing a headache and is going to be very awkward.

“Where will they be positioned if they turn up? What events can they attend?

“Will we put them on the Buckingham Palace balcony for the flypast?

“This is a celebration for the Queen’s 70 years of service to the nation and should not be overshadowed.”