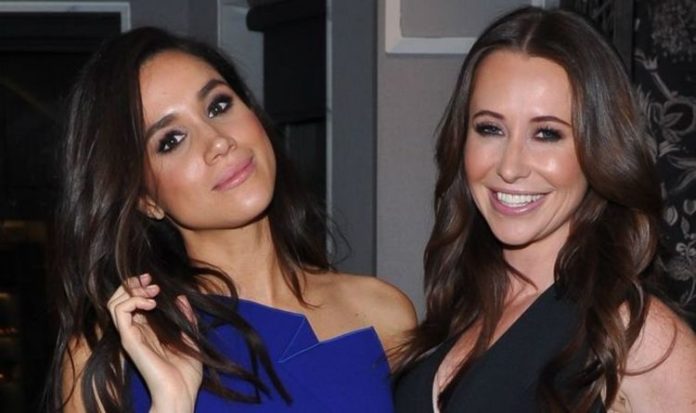 The Canadian stylist, 40, posted a message on Instagram hailing the video calling app for connecting her with her friend. In June Jessica’s career was thrown into the air over a race row with black influencer Sasha Exeter.

US-based Sasha shared a series of unpleasant messages in which Jessica allegedly threatened to sue her.

Jessica lost her TV job amid the fallout and reports suggested she had fallen out with Meghan, 39, over the public dispute.

But seeking to put rumours of a friendship rift to bed, Jessica revealed last month that she and the Duchess of Sussex are still on good terms.

In an interview, the mother-of-three said of her royal pal: “She constantly FaceTimes and checks up on me.”

And now royal fans believe the once notoriously close pair are using the video calling app to enjoy some girly chats as they live in different countries.

After Jessica said she had enjoyed a FaceTime call with a “girlfriend” some royal fans immediately assumed she was referring to Meghan.

Jessica posted: “My girlfriend and I just laughed so hard it actually hurts. God bless FaceTime.”

One person said they could not keep up to the changing updates on the friendship between Meghan and Jessica, dubbed “Yessica”.

The royal watcher tweeted: “Wait what? I thought Yessica was cancelled. Can’t keep up.”

The person wrote: “I take it she has friends other than Meghan?”

Meghan first met Jessica during her Suits days in Toronto.

The two ladies hit it off and were often pictured out and about in the city, heading to exercise classes and running errands.

Meghan holidayed abroad with the stylist and after she relocated to the UK to marry Harry, 36, she kept in contact with Jessica.

Jessica’s daughter Ivy acted as bridesmaid at Meghan and Harry’s Windsor wedding in May 2018.

And her twin sons Brian and John were pageboys who carried the bride’s veil down the aisle.

The former presenter was fired from her TV role in the summer after the race row.

Within days of Sasha going public with the messages, Jessica lost her gig with “Good Morning America,” and her show “I Do, Redo” was axed by CTV, a Canadian network.

Jessica also stepped down from several charity positions she had held.