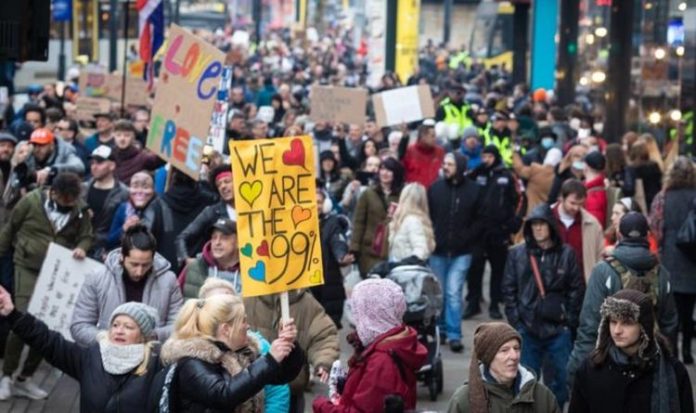 Large crowds gathered in Piccadilly Gardens, Manchester, this afternoon, against the Government’s tiered measures that came into force after England’s lockdown ended on December 2. People were pictured carrying placards that said: “I will never comply” and “It’s time to unite”.

Manchester City Councillor Pat Karney blasted those who took part in the march against the city going into tier 3.

He said it was “totally dangerous and irresponsible”, before adding it was also “two fingers up” to medical staff and those who have died of the virus.

They protests appeared to be peaceful this afternoon, although pictures taken at the event showed people stood close together at the outdoor meeting place,.

Many were also not wearing masks.

One man was reportedly detained for flying a drone.

But Greater Manchester Police (GMP) confirmed no arrests have been made yet.

A spokesperson for GMP said the force was aware of a large gathering taking place.

They added officers were in attendance.

The police said: “Prior to this gathering, officers engaged with the organiser and encouraged them to remain compliant with current Government restriction.”

READ MORE: Farage warns UK could be under lockdown measures until Easter

Protesters took their demonstration to the streets marching around the city centre and chanting.

The protest comes as violent clashes between police and anti-lockdown protesters have broken out elsewhere in recent weeks, including central London last week.

This resulted in more than 150 people being arrested.

Many held signs saying “All I want for Christmas is my freedom back”, as well as “Ditch the face masks” and “Stop controlling us”.

They marched from Hyde Park to Oxford Circus and Regent Street before they clashed with helmeted police who arrived in several vans.

The Metropolitan Police said hundreds of officers made “early interventions” to stop people gathering and urging them to go home.

People who did not turn back were either arrested or issued with fixed penalty notices.