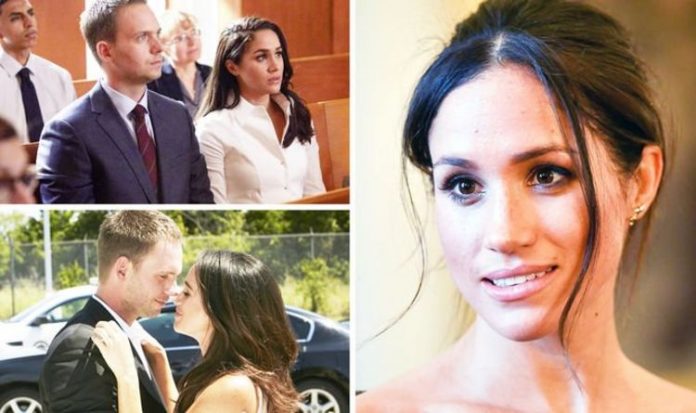 Meghan Markle, 39, starred on the hit US legal drama ‘Suits’ before she quit acting once engaged to Prince Harry, now 35. The TV actress played a number of characters in smaller celebrity films too, including the role of ‘Hot Girl Number 2’ in an Ashton Kutcher flick. She gave up her career in show business to join the Queen’s grandson on royal duties, prior to their departure from the Royal Family. Before their romance became official, rumours were rife about why the actors of ‘Suits’ were so close – which was questioned during one heated interview.

In previous comments, Meghan described the cast’s relationship as being similar to a family but US talk show host Larry King had deeper suspicions.

He quizzed the future royal, who played Rachel Zane, and her TV co-star Patrick J Adams, her fictional love interest Michael Ross, about whether their onscreen emotions spilled-over into real life.

During initial questions, the popular presenter interrupted Meghan a number of times as she tried to explain her character’s role as a “paralegal of the firm” in 2013.

He quipped “seductive?” in a question about how she acted in the show, before she fired back: “I don’t know, do you think so Larry?”

She continued: “No, I think she’s really savvy, she has this encyclopedic knowledge of the law.”

READ  no Brexit deal better than a Canada-style one - UK

Next Larry went onto question how Patrick and Meghan appeared to act so naturally around one another onscreen.

Her co-star revealed they had filmed a pilot called ‘Good Behaviour’, in which Meghan was “the love interest for one of the twins” that were both played by him.

When Patrick was pressed for answers about whether he was in a relationship, he fired back with an unusually worded response: “I am not married but not single.”

Meghan, who looked displeased by the insinuation, said: “I think TV sees us a certain way, right?

“We did this show for ABC years ago and very similarly my character was polished and he played this sort of rough around the edges guy.

“‘Suits’ is the same sort of thing, so I think we’re natural.”

Patrick explained that making their relationship look real was pivotal to the show being a success.

The questioning then moved onto lying, where Larry jokingly accused them of trying to deceive him.

Patrick quipped: “I have not said one single truth this whole interview.”