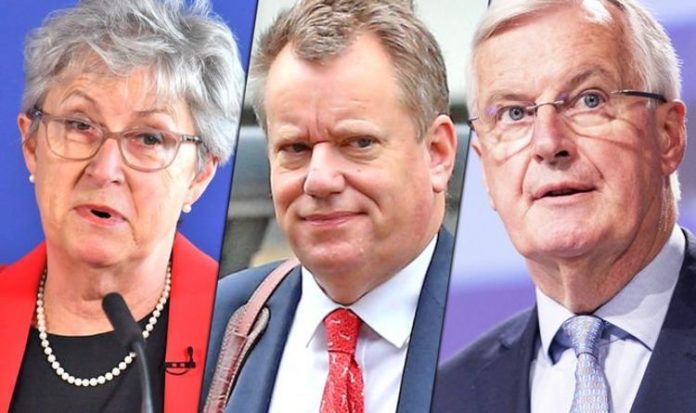 EU and UK negotiators have yet to find a way to overcome “significant divergences” in their attempt to seal a post-Brexit agreement. Following the UK’s departure from the EU on January 31, the two sides are trying to secure a new trade deal before the end of the year, when Britain will effectively exit the EU’s customs union and single market. However, negotiations have proved difficult and the parties appear far apart on a number of issues including regulations for businesses and the fishing industry.

After the fifth round of talks broke out in London at the end of July, the EU’s chief Brexit negotiator Michel Barnier said a trade deal with the UK by the end of the year appears “unlikely”.

In a statement, his British counterpart David Frost, also concurred that there were “considerable gaps”.

Moreover, Downing Street is said to be already working on the assumption Britain will have no trade deal in place when the transition period ends on December 31.

In an interview with Express.co.uk, though, Baroness Gisela Stuart suggested both sides might be bluffing about the chances of not reaching an agreement by the end of the year.

This week, the European Commission published a 39-page dossier of preparations businesses and citizens need to make before the end of the year.

Member states are warned that choices made by Prime Minister Boris Johnson in pushing to deviate from EU rules and opting not to extend the transition period beyond December meant “inevitable disruptions” will occur next year.

This would “risk compounding the pressure that businesses are already under due to the COVID-19 outbreak”.