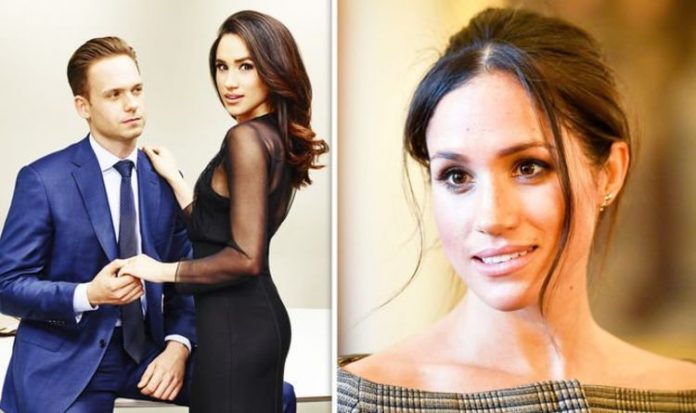 Meghan Markle and Prince Harry announced their plan to depart from roles within the Royal Family earlier this year. Recently, it was revealed that they will work on a factual series to shine light on causes close to their hearts – in a reported £77million ($100M) Netflix deal. The former-US actress is no stranger to the world of TV, having become a popular figure on the drama ‘Suits’. Additionally, she can likely recall knowledge taught to her by her father Thomas, who worked in the industry as a Director of Photography.

Meghan, 39, starred as Rachel Zane in the popular US show for nine seasons until 2018 – when her last episode aired months before the Royal Wedding.

During her stint on the show, prior to her demand for privacy in recent years, the actress gave a number of interviews about the role and her life.

In one with Yahoo Life in 2015, she was asked by her friend Joe Zee what it was like to play “the most kicka** lawyer” and also to “have hot guys with you all the time”.

The cheeky question provoked laughter from the stars, but Mr Zee continued to list who he deemed as the attractive stars including Adams and Gabriel Macht.

He probed further when he quizzed: “Is it hard to work with all of that hotness?”

Meghan chuckled as she quipped: “I mean, how do you even answer that? No. Absolutely not. It’s one of the job perks, right?”

Soon after she changed the subject by stating that her character had “the best wardrobe you could ever imagine” and admitted to “borrowing things, here and there”.

She continued: “There’s a Tom Ford skirt and I think, ‘If Rachel can wear that on Tuesday as a paralegal, then I can certainly borrow that for a Valentine’s date!’ It’s pretty fun!”

Meghan felt that she and her character’s dress senses had “morphed together” over time and that it had made her more adventurous.

She said: “They have completely… Once you have been invested in the character for that long there starts to be a bit of an overlap.

“There are more classic pieces and it also sort of made me go outside of the box a little bit, and give me a better knowledge of other designers too.”

Meghan believed she embodied the “relaxed, California girl” style and added: “I like to look polished and put together but there is always going to be an effortless quality of it being from LA.

“I love her (Rachel’s) clothes but in my off time I’m not going to wear a pencil skirt because I wear one five days of the week for work.”

In another insight, she revealed that the cast relied predominantly on tailored items – which she considered to be the best way to look good no matter about a person’s budget.

She added: “If it fits you to tee you look a million times better and I learned that working on ‘Suits’.

“We literally do our fittings on the inhale, ‘One, two, three and (she breathes in)’ – to that point, when things are fitting perfectly, you will look fantastic.”