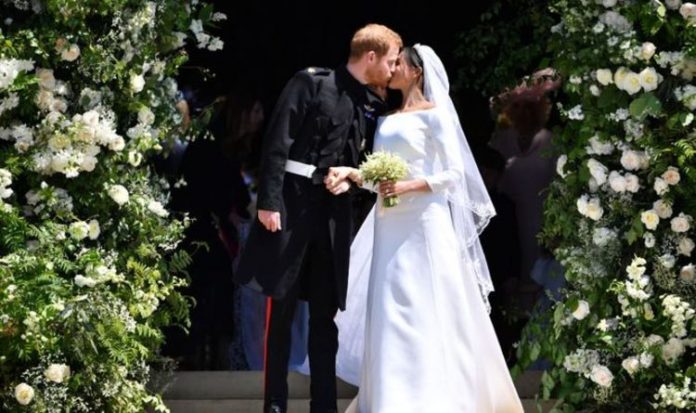 Ms Mulroney, a Canadian fashion stylist claimed she was terrified when her twin sons were carrying the Duchess of Sussex’s veil during the 2018 ceremony which was televised around the world. The twin sons, Brian and John, were tasked with carrying Meghan’s 16-foot (4.8m) silk veil up the stairs of St George’s Chapel at Windsor Castle.

Ms Mulroney feared her boys, who were then aged 7, would “mess up” and that “things did not look good leading up to the wedding”.

She said: “I have identical twins, so they’re naturally magnetised like they just do not separate.

“And during all the rehearsals at the royal wedding they were just messing up, they just couldn’t get it right and it was really scary as a parent.”

In an interview with The Morning Show, the fashion stylists decided to skip the rehearsals and prepared the page boys for their crucial moment by telling them: “There’s two sides, there’s two aisles, you both look identical, you need to do the same show for each aisle”.

Despite the fears, the wedding went smoothly and the boys proudly assisted the Duchess gracefully up the steps.

After the wedding Ms Mulroney posted a picture in Instagram with the caption admiring both her boys and her friend, saying: “Proud friend. Proud mom.”

Ms Mulroney also said she was “excited” for the news of Meghan’s second pregnancy, praising the royal pair as “tremendous parents”.

He said dating for him or any member of the royal family is “flipped upside down” adding that early dates take place at home and only when they are a couple do they venture out in public.

“We got to spend an enormous amount of time just the two of us,” he said of his early relationship with Meghan.

Speaking to James Corden, he concluded: “There were no distractions, and that was great, it was an amazing thing. We went from zero to 60 in the first two months.”