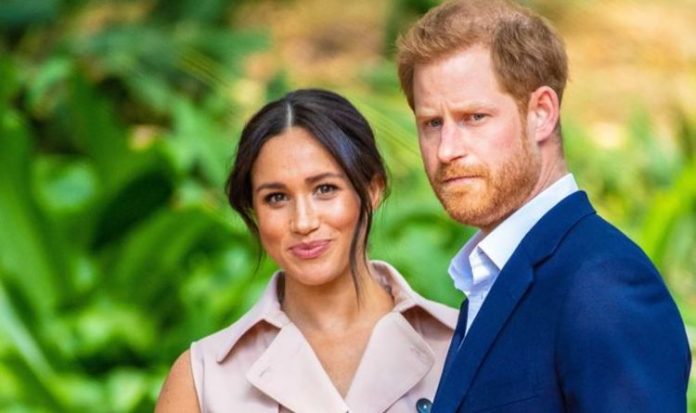 Meghan Markle and Prince Harry now live with their son Archie in California after stepping down as senior royals earlier this year. Their neighbours include popstar Katy Perry and actor Orlando Bloom, who welcomed their first daughter Daisy Bloom last month. But it has emerged Katy once made a cutting comment about the dress Meghan wore when she married Harry in the grounds of Windsor Castle, in 2018.

Kate told Entertainment Tonight two years ago: “I would have done one more fitting. I’m never not going, to tell the truth! One more fitting, but I love you.”

Katy then compared the dress to Kate’s 2011 wedding lace gown, which was designed by Alexander McQueen.

“I’m so happy for them, and you know, I don’t know them from Adam, but it’s amazing what she’s doing with all this, her humanitarian effort.

“You know, the fact that she’s a proud feminist, I love all that.

“I support her as another woman and love her and wish them both well.”

Katy and Orlando bought a $14.2 million house next to Meghan and Harry in Montecito this month.

According to Variety, their home has nine bathrooms, sixteen bedrooms, as well as a five-car garage.

Meghan looked stunning in her dress, which was designed by Givenchy designer Claire Waight Keller.

Harper’s Bazaar writer Mahalia Chang explained Meghan chose a cut that would allow her to move around without the fabric of the dress gripping her to tightly.

She wrote that the “fabric, as well as the triple silk organza used to make the underskirt, is extremely thick, stiff and does not allow for much stretch. If one were to hazard a guess, you would say that Keller and Markle purposefully chose a more conservative cut along the bodice and sleeves to let the bride move and breathe in the dress more comfortably.

She added: “‘If the cut had been skin-tight—as some are suggesting it should have been—then there’s a chance that Meghan would not have been able to sit (in the car, or during the service) or freely move her arms, due to the constricting nature of such a thick material being cut so tight.”

Meghan and Harry have quickly set up a new life in the US after leaving their Windsor home behind them to seek financial independence.

They signed a £112 Netflix deal to create a variety of docuseries.

The couple have also been outspoken on a number of different issues, including sharing videos of them urging US voters to vote in next week’s election.