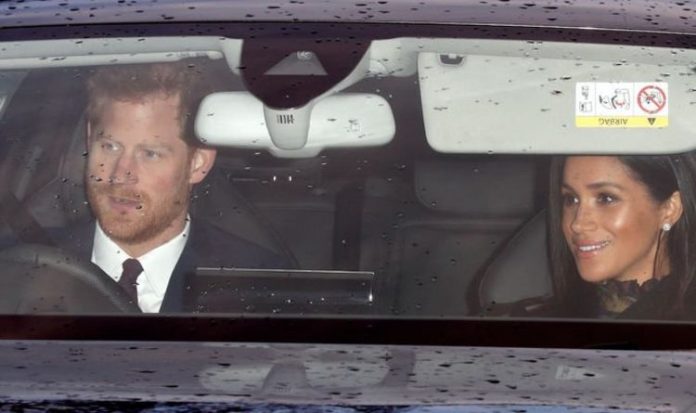 More than a year has passed since Meghan and Harry departed the UK and the Royal Family for a private life in North America. Quickly dubbed “Megxit”, the ordeal sent shockwaves through both the Firm and British public. Nothing on the same scale had happened since King Edward VIII’s 1936 abdication to marry his American socialite lover, Wallis Simpson.

Parallels were quickly drawn between the two as the couple set sail for Canada.

While Meghan and Harry pinpointed privacy as one of the main reasons for their leaving, others cited reports suggesting the pair were unhappy with the family’s plans to push them out as part of a “slimming down” programme.

Privacy is a cherished commodity in the Royal Family, rarely seen as a result of the public roles each member of the inner circle inherits.

In a documentary released shortly after their departure, royal reporter Robert Johnson rubbished claims that Meghan and Harry had been hounded by the media and their privacy compromised.

He told ‘Harry and Meghan: The Next Step’: “Obviously claims they feel, ‘We’ve been hounded by the media’.

“The royal rota system works, I think it’s given them an awful lot of publicity.

“It’s been going since the Fifties.

“And one must remember that this is an unelected institution that relies upon media, publicity, the public support for its life’s blood.”

JUST IN: Meghan tipped to cause royals trouble with ‘best buddy’ Kamala Harris

Canada: Meghan and Harry at the Canadian Embassy in London ahead of their move (Image: GETTY)

Also speaking during the documentary, royal author, Robert Hardman, further disassembled the privacy argument, claiming that the pair “wanted to have their cake and eat it”.

He said: “Look, they’re clearly very unhappy with the royal existence that they have at the moment and the way that their public life impinges on them.

“It’s something they clearly want to change and many people will have sympathy with that – it’s understandable.

“The crux of the matter is you can’t be half-royal – you can be part of the royal machine, you can accept the privileges that go with it but also take the restrictions.

Royal tour: The pair’s South Africa visit has been seen as the prelude to their departure (Image: GETTY)

California: A mural of Harry in California where he and Meghan currently reside (Image: GETTY)

“And you live in a sort of bubble, or you can stand back – the next generation of Dukes of Kent, Dukes of Gloucester, they’re private citizens, no one would recognise them in the street.

“You can go down that route if you want.

“What you can’t do is to be a sort of Trans-Atlantic royal who drops in, does a bit of royal stuff, but then goes off to do this sort of financial independence stuff in LA or Toronto or wherever it is.”

He added: “As the Prime Minister would say, his famous dictum about pro-cake and pro-eating – I mean that point has been made.”

Royal romance: The pair met on a blind date in 2016 (Image: Express Newspapers)

Soon after the pair made the announcement, the website ‘Sussexroyal.com’ was set live in what appeared to be their first move towards an independent identity, separate to the monarchy.

Yet, as the name suggests, the website was quite literally named after their royal titles.

They have since reclined into even further privacy, their day-to-day lives completely removed from the public’s eye after the Sunday Times reported that they had deleted all of their social media profiles.

This was a result of the pair’s constant online bullying.

Royal Family: It is unclear when or if the couple will ever return to the UK post-pandemic (Image: GETTY)

Meghan herself previously claimed to be 2019’s “most trolled person in the entire world – male or female”.

It is believed they will no longer promote their independent organisations, such as the Archewell Foundation, via social media anymore.

Following the first episode of their Spotify exclusive podcast, the couple found themselves embroiled in a privacy controversy after baby Archie was allowed to speak in what would have been listened to by millions of people around the world.