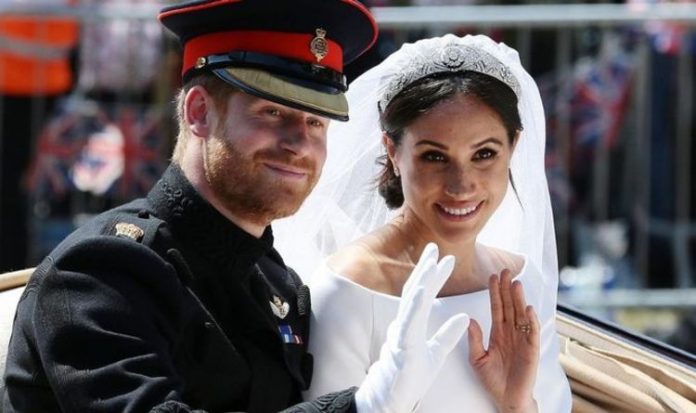 Prince Harry and Meghan Markle’s wedding was held in May 2018 at St George’s Chapel at Windsor Castle – but estranged sister Samantha claims it should have been rescheduled so her father, Thomas, could attend. Thomas Markle did not attend the royals’ wedding and Prince Charles instead took his place to walk the Duchess down the aisle.

But in Samantha Markle’s new tell-all book, the half-sister criticises the royals for not postponing the wedding after her father’s heart attack.

The 2018 wedding took months to plan and organise which involved a large and expensive security operation.

The Sussexes invited hundreds of guests, including many who had flown in from overseas.

Nearly 3,000 members of the public were also invited to attend the huge celebration.

However, Samantha claims the Royal Family should have put the event on hold for her father.

She wrote: “The Royals couldn’t postpone the wedding so that my father could be included, and I knew it was not unreasonable that they reschedule, given resources available to make that happen.”

Meghan and her father were estranged before the 2018 wedding but experts claim the Duchess still hoped he would attend the event.

In Omid Scobie and Carolyn Durand’s biography of the Sussexes, ‘Finding Freedom’, the royal commentators wrote that Meghan was “humiliated” over the situation.

Meghan’s father had reportedly undergone surgery after having a heart attack the week before the wedding.

Samantha’s new book, ‘The Diary of Princess Pushy’s Sister: A Memoir, Part One’, was published in the US by the small press Central Park South Publishing.

The Duchess is thought to have last seen her half-sister in 2008.

Despite the fact the pair have not seen each other for nearly two decades, the royal’s half-sister has claimed Meghan is “not the same”.

She claimed the Duchess was “mean” on the phone to her father as soon as Prince Harry left the room.

Samantha wrote: “I said, ‘Dad, what’s going on, what’s wrong?’ He said, ‘This is really weird, she’s not the same.

Sources have said Meghan is not bothered about Samantha’s new memoir.

Speaking to Vanity Fair, a friend of the Duchess of Sussex said the book has “barely registered on her radar”.

They added: “Meghan has not seen Samantha for years so the idea that she is worried about the book is nonsense. Meghan barely knows Samantha, they haven’t seen each other for nearly 20 years.”