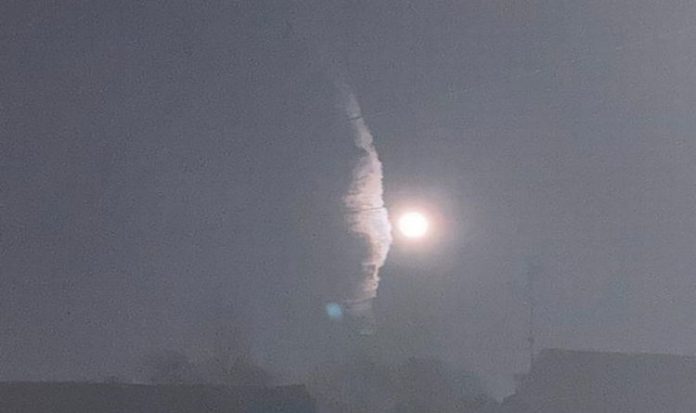 The formation was photographed in The Reddings, Cheltenham, at around 8:43pm on Sunday, just an hour before the fireball meteor was sighted. James Parfitt spotted the mysterious pattern near an Asda. He told GloucestershireLive: “There I was just putting the rubbish in the bin, looked up and saw this amazing phenomenon.

He said: “If you look at other photos from past meteor showers it looks identical, so perhaps there were more earlier?

“It’s too much of a coincidence to not be related.”

Mr Parfitt took the picture in his garden, looking east towards the Asda supermarket, Cheltenham and the Cotswolds.

The meteor is thought to have landed somewhere between Swindon Village and Bourton-on-the-Hill. This includes Bishop’s Cleeve, Winchcombe, Prestbury, Stanway and Temple Guiting.

Residents of these areas are being urged to contact the UK Meteor Network or National History Museum if they find any fragments of the object.

Dr Katherine Joy from the University of Manchester said: “If you do find a meteorite on the ground, ideally photograph it in place, note the location using your phone GPS, don’t touch it with a magnet, and, if you can, avoid touching it with your hands.”

Experts are also warning people not to travel to this area to find fragments due to the lockdown restrictions.

According to the scientists from UKFall, which is led by staff at the Natural History Museum, the bright light could be seen all the way from Ireland to the Netherlands.

Sam Harris, 28, from Leeds, said he was in bed talking to his fiancée when he witnessed the “breathtaking” fireball.

Mr Harris said: “As I looked out of the window I saw what I thought at first was a huge firework, but it was descending in an ark. There was a trail of orange and green and it was incredibly bright!

“It was breathtaking… I couldn’t sleep for a few hours afterwards – I had a strange adrenaline kind of buzz!”