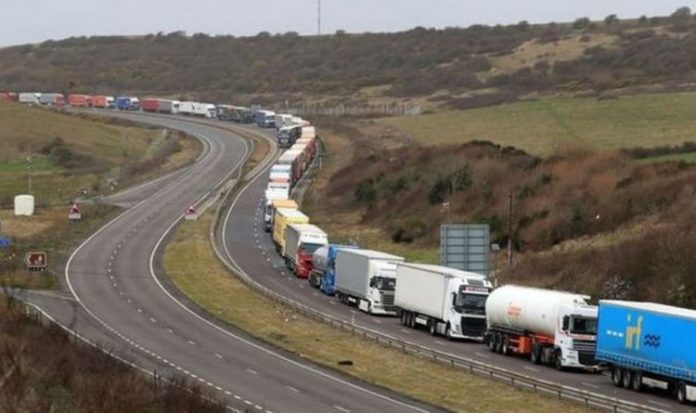 HMRC, who will oversee new customs paperwork for hauliers following January 1st, has launched a trial of the new system and is inviting them to participate in remote-user testing for the new scheme. The new scheme will be known as the Goods Vehicle Movement Service (GVMS) and will monitor all U.K.-EU goods flow from July and cross-Irish Sea trade from January 1st, 2021.

It will work by giving hauliers and freight companies a unique reference number.

This number will prove they have filed the necessary post-Brexit paperwork including vital customs declarations for goods.

It comes as The European Union’s chief Brexit negotiator, Michel Barnier, on Wednesday said he might meet his British counterpart in person next week for further negotiations.

Barnier said this week he had no plans to meet David Frost this week, before adding: “But perhaps next week if conditions allow.”

Negotiations between Britain and the EU over post-Brexit ties made scant progress last week, with both sides blaming the other for the stalemate

A HMRC internal memo says the Government is seeking to start trials as soon as possible on the scheme due to the time left in the transition period.

The memo, added: “When designing a system that the industry will be using, it is important we work in partnership with them to make sure it suits their and our needs.

“We will continue to develop our systems in readiness for the end of the transition period and when full border controls are implemented from July 2021.”

But Anna Jerzewska, founder of Trade and Borders, a customs and trade consultancy, told Bloomberg: “The Government has made it clear that GVMS is unlikely to be ready for January 1 and as far as we understand there will be back-up procedures in place.

“It will be crucial to ensure that such alternatives are available in places where traffic management will be important.”

It comes amid fears Dover, which is Britain’s main gateway to Europe could become blocked up by customs checks and tailbacks of lorries would quickly form on nearby roads.

Recent figures show 16,000 trucks a day passing through to the French port Calais at peak times, transporting everything from perishable food to medicines and industrial goods needed to keep factories running.

Westminster, however, has published guidance in July 2020 which outlined several trade and customs requirements which would need to be fulfilled between the UK and the EU following the end of the transition period.

From 1st January 2021, customs declarations would be required for both imports and exports to and from the EU.

Duties would also be payable on imports under a new UK Global Tariff where people who are importing goods would need to declare the customs value of the goods and where they are from.

However, Whitehall has made clear it would be possible to defer customs declarations by up to six months on standard goods meaning payments can be deferred until such a time that the declarations are made.

Goods being imported from the EU would also be subject to VAT and importers would need to account for this.

Cabinet office Minister Michael Gove, who is leading the negotiations, said that he believes the two sides can reach a free trade agreement.

Mr Gove said: “All the evidence is that we are making progress with the European Union.

“I believe that there will be a successful negotiated outcome.”