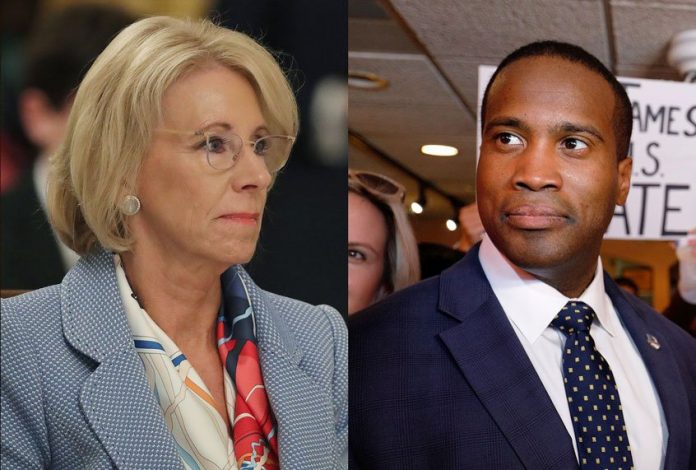 Michigan Republican Senate candidate John James has sought to downplay his ties to Secretary of Education Betsy DeVos, but new campaign finance disclosures show her family is one of his biggest backers.

James, an Army veteran and businessman who lost his 2018 Senate race to Sen. Debbie Stabenow, D-Mich., is running again this cycle against Sen. Gary Peters, D-Mich., with the backing of President Donald Trump.

Though he has tried to distance himself from DeVos, James has enjoyed a cozy relationship with her family.

The Senate candidate has hired Olivia DeVos, the secretary of education’s niece, as his assistant communications director. She is a recent college graduate who appears to have no relevant experience in communications or politics. (The only experience listed on her online resume is as an intern at her family’s Amway empire and as a summer associate at her family’s RDV Corporation.) The hire came after her parents, Douglas and Maria DeVos, directly contributed more than $20,000 to James’ Senate campaigns.

James’ wife, Elizabeth, has worked at Amway since September 2019 and had a previous stint at the company between 2009 and 2012. Amway, founded and owned by the DeVos family, is a multi-level marketing company which has faced multiple lawsuits alleging that it operates as a “pyramid scheme.”

James has praised Betsy DeVos in the past, arguing that “the job Betsy DeVos is doing in public education, I think, is very, very good.” But as the education secretary has come under heavy criticism for using her position to undermine public education and loan forgiveness programs, as well as to funnel coronavirus relief funds to private religious schools, James has downplayed his connections to her.

“I haven’t gotten any money from Betsy DeVos,” he declared in a leaked conversation with Black community leaders on which he also downplayed Trump’s racist rhetoric.

While James has not received any direct contributions from Trump’s education chief, the DeVos family has been one of his biggest backers, according to data from the Center for Responsive Politics.

Despite trailing Peters by double-digits in recent polls, James has enjoyed an unusual influx of cash, outraising the Democrat in each of the last four quarters even as higher-profile Republicans like Sen. Susan Collins, R-Maine, and Sen. Martha McSally, R-Ariz., trail significantly behind their Democratic rivals.

Though Betsy DeVos vowed that her husband would not be involved in political contributions if she was confirmed, Dick DeVos’ network has funneled massive sums of money into the race — more than twice as much as it did in 2018. The DeVos-funded Better Future Michigan Fund has already spent more than $1 million to oppose Peters, according to the Center for Responsive Politics.

James’ campaign did not respond to a request for comment from Salon.

Though James claims to be running on a platform of unity and bipartisanship, he has supported repealing Obamacare; compared abortion to “genocide” and called for the repeal of Roe v. Wade; as well as opposed the legalization of recreational marijuana, which Michigan voters later approved by a double-digit margin.

“John James’ agenda is out of step with how Michigan voters feel and what they believe,” Lori Carpentier, the president and CEO of Planned Parenthood Advocates of Michigan, told Salon. “Take his stance against abortion – polling consistently shows voters here support keeping abortion safe, legal and accessible. He’s called for a repeal of Obamacare despite the fact that the law has given nearly 700,000 Michiganders access to care. With so few voters in agreement with James on the issues he thinks are going to carry him into D.C., he needs every penny Betsy DeVos is willing to send him – and he needs to hope Michigan voters forgot that two years ago, they rejected him for the same job.”

A Democratic political action committee said James hiring DeVos’ niece was as “swampy” as it gets.

“It doesn’t get more swampy or corrupt than to hire one of your biggest donor’s family members while pushing their extreme policies,” Zach Hudson, a spokesman for American Bridge 21st Century, told Salon. “The DeVos family has bankrolled John James’ failed political career, so it isn’t surprising he is hiring their relatives while pushing their anti-education agenda. John James is hiding from reporters and lying about his background, because he knows his extreme views are far outside the mainstream of Michigan voters.”

The post Michigan GOP candidate who downplayed ties to DeVos hires her niece after getting $1M cash infusion appeared first on Salon.