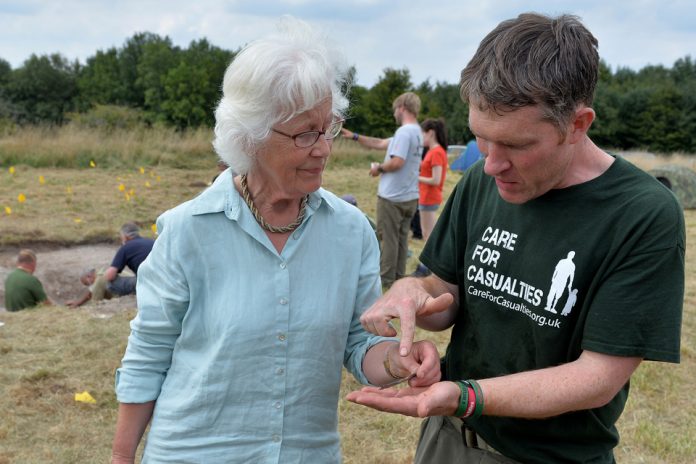 Richard joined DIO in 2004 and has led the archaeology team for a number of years. He and his team look after around 770 Scheduled Monuments, parts of 10 World Heritage Sites, and other historical sites owned by the MOD.

These range from the remains of Roman villas to First World War training trenches. It is important to the MOD to protect these sites and monuments so the work of Richard and his team is vital to allow military training and historic preservation to co-exist.

The MBE is also in recognition of Richard’s role as co-founder of the award-winning Operation Nightingale. In 2011, he worked with The Rifles to arrange for wounded, injured and sick service personnel and veterans to take part in archaeological digs on the Defence estate. The project has only grown since then, with Richard and other archaeologists leading hundreds of participants in dozens of digs over the years.

Operation Nightingale gives participants the chance to spend time with people who understand their experiences while learning new skills, and its excavations have shed light on the history of several areas. For example, in 2013 the team excavated the remains of a Spitfire shot down in 1940 over Salisbury Plain. The pilot, Paul Baillon, was able to escape by parachute but was sadly killed in action mere weeks later. His daughter, Rosemary, attended the dig and Richard was able to talk her through the finds.

In 2019, Current Archaeology magazine named Richard their Archaeologist of the Year in recognition of his work on various excavations and for his role with Operation Nightingale.

Richard also spends some of his time educating people and promoting the importance of archaeology on the Defence estate through his work with the media, including as a contributor to Channel 4’s Time Team and the BBC’s Digging For Britain. He also advised Philip Pullman on archaeology for his popular series of novels, His Dark Materials.

I was flabbergasted when I heard the news; I genuinely thought that this might have been a practical joke by one of the veterans I had worked with over the last few years. It was a lovely surprise to hear at the end of what had been a trying year for everyone. I genuinely feel extraordinarily privileged to work in a discipline that still excites me, with people I admire, and in a landscape I adore. The award is a testament, I think, to the way that DIO looks to care for the historic estate with which we are entrusted. Additionally, the astonishing achievements of men and women I have seen on Op Nightingale are woven through all the work that I am most proud of and they are partners in this award.

Richard was nominated by his line manager, Richard Brooks, DIO’s Head of Technical Services. He said:

Richard has been DIO’s Senior Archaeologist for over ten years. He has contributed enormously to our understanding of the archaeology and heritage on the Defence estate and has worked extremely hard to protect it. He’s very well regarded in his field, having been named 2019’s Archaeologist of the Year, and has also done great work with the media explaining the importance of looking after Defence heritage. Perhaps most importantly, he is a huge part of Operation Nightingale which has genuinely changed the lives of many wounded, injured and sick service personnel and veterans for the better. Supported by others I nominated him for all of these reasons, and I’m thrilled to see him recognised for his work.

Dickie Bennett has known Richard for years, first as an Op Nightingale participant and more recently as Director of Breaking Ground Heritage. He said:

Richard is responsible for influencing the lives of so many veterans in such a positive way. It’s hard to lose your career or sense of being and have nothing to look forward too, but Richard found a way around that for many of us, showing us alternative routes in our lives that were just as fulfilling. I, amongst others, owe Richard a great deal of gratitude and I am proud to call him my mentor and friend.

I was delighted to hear of the award of MBE to Richard in the Queen’s New Year Honours list. Richard is an outstanding expert who ensures that DIO does all that it can to protect and to understand the archaeology of the Defence Estate. But he does much more too – bringing archaeology to life, and working with ex-service men and women so that they too can benefit from the insights that archaeology gives on how their predecessors lived and trained on today’s military land. A genuinely inspirational professional, and recipient of a well-deserved honour.

DIO is the part of the MOD which manages the military’s land and buildings.