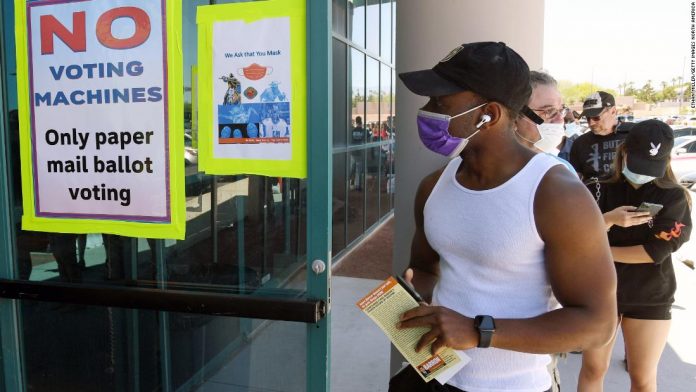 The state of Nevada has approved a plan to send absentee ballots to all active voters this November, a major expansion of mail-in voting in the battleground state.

Over the weekend, the Democratic-controlled Nevada state legislature passed a sweeping election bill along party lines. Gov. Steve Sisolak, a Democrat, signed the legislation Monday afternoon. That makes Nevada the eighth state, along with the District of Columbia, to adopt universal vote-by-mail for the presidential election in November, amid the ongoing coronavirus pandemic.

“This bill will help prevent Nevadans from experiencing the long lines at polling locations they faced during the Primary election, which will protect their safety, safeguard their right to make their voices heard, and help reduce the spread of COVID-19,” Sisolak said in a tweet Monday.

President Donald Trump quickly slammed the move on Monday. He falsely accused Nevada Democrats of orchestrating an “illegal…coup” and threatened to bring a lawsuit to stop the state from expanding mail-in voting, which he says will weaken his chances of winning reelection.

Democratic state lawmakers who crafted the legislation say they are giving voters more options to participate in the election at a time when in-person voting poses a legitimate health risk.

“This is good public policy that is going to keep people safe,” Nevada Assembly Majority Leader Teresa Benitez-Thompson, a Democrat, told CNN. She said that in addition to proactively sending ballots to all voters, the new law requires some polling places to remain open for early voting and Election Day. “It’s a way to balance health and safety with everyone’s constitutional right to vote.”

The legislation will allow election officials to send absentee ballots to every “active registered voter” in the state. It will also extend the deadline for when mail-in ballots can be counted after Election Day, so mailed-in ballots can still be counted if they arrive one week after November 3.

The legislation will also ease some restrictions for who can legally handle and submit other people’s ballots — a move that Republicans claimed could lead to voter fraud.

Democratic and Republican officials across the country have made voting-by-mail easier this year, because of the pandemic. But Trump and other top Republicans say Nevada’s decision to automatically send ballots to all registered voters is a partisan power grab to help Democrats, and have falsely claimed that there are “massive” amounts of fraud with mail-in voting systems.

“In an illegal late night coup, Nevada’s clubhouse Governor made it impossible for Republicans to win the state,” Trump tweeted on Monday morning. “Post Office could never handle the Traffic of Mail-In Votes without preparation. Using Covid to steal the state. See you in Court!”

Twitter did not take any action Monday to label or fact-check Trump’s post — even though it contained false information and Twitter previously fact-checked misinformation about voting rules in specific states. A Twitter spokesman told CNN that Trump’s tweet “is currently not in violation of the Twitter Rules and will not be labeled.”

At a news conference Monday afternoon, Trump repeated many of his debunked claims about mail-in voting and specifically criticized the new Nevada law. “This is something that’s so messed up,” he said.

In addition to Nevada, eight other jurisdictions will mail ballots to all voters in November. Hawaii, Colorado, Oregon, Utah and Washington state had this plan all along. Vermont, California and the District of Columbia switched to this method this year because of the coronavirus pandemic.

Nevada’s new voting rules were not endorsed by any Republican officials. Secretary of State Barbara Cegavske, a Republican, oversaw the June primary where all voters were mailed ballots. But she did not support the new legislation setting similar procedures for November, the Associated Press reported. The bill also took away some powers from Cegavske’s office and moved them to the Democratic governor.

Still, Cegavske testified at a recent state assembly hearing that there were zero instances of fraud during the June primary elections, which were conducted almost entirely by mail. Nevada Assemblywoman Sandra Jauregui, the Democratic chair of the elections committee, said there was record turnout in the primary.

“Our number one job as elected officials is to make sure that everyone gets to be part of the democratic process,” Jauregui said. “We have proven in the primary that this is a successful way to do it.”

Before the June primary, Cegavske’s office put out a fact sheet debunking a dozen myths and conspiracy theories about postal voting — including some that were even spread by Trump.

Before Nevada’s primary, Trump threatened to withhold federal funds to punish the state for expanding mail-in voting. (He didn’t end up diverting any money away from Nevada.) Trump has repeatedly pushed the debunked lie that US elections are plagued by widespread voter fraud, even though officials from both parties say there are many safeguards in place, and studies have found that more than 99.999% of ballots are proper.

State Assembly Deputy Minority Whip Chris Edwards, a Republican, told CNN that he is afraid that Nevada’s new plan for November might open the door to voter fraud schemes. Fraud is incredibly rare in US elections, but when it happens, it disproportionately involves absentee ballots and crooked vote-collecting operations, which are sometimes called “ballot harvesting.”

Edwards pointed to a provision in the bill that allows authorized persons to deliver absentee ballots on behalf of other voters. This is typically used by older voters who need help filling out and submitting their ballots. But these procedures can be abused by political operatives who improperly collect ballots, change votes, forge signatures, and drop them off to be counted.

“There is no reason to do mail-in ballots,” Edwards said. “We can open enough polls. We can have social distancing if they want. If Walmart and Costco and all of these large stores can do business in this pandemic, we can do voting.”

Trump has urged states not to expand mail-in voting during the pandemic, because he says it will hurt his reelection, even though experts say it doesn’t automatically benefit either party.

Unlike other states with all-mail voting — like the liberal bastion of Oregon or the conservative stronghold of Utah — Nevada was very competitive in 2016. Trump lost to Democratic nominee Hillary Clinton by about 2.5%. And he is looking to compete again this year, which is likely why he encouraged the Republican National Committee to challenge the new Nevada law in court.

Election experts say there are some risks to voting systems like the one Nevada just adopted, where each registered voter is automatically sent a ballot. This system takes away some of the burden from voters, who don’t have to request their mail ballot. But those steps are important safeguards to ensure that residents are still alive, eligible to vote, and live at the right address

The post Nevada approves plan to mail ballots to all registered voters appeared first on CNN.