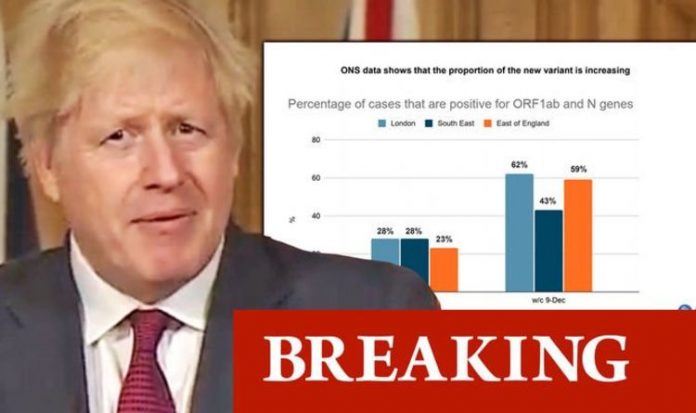 New data from the Office of National Statistics (ONS) has revealed the proportion of the new variant is increasing in London, southeast and the East of England. Prime Minister Boris Johnson has revealed these regions will now be in a fourth tier to curb the rising number of cases.

The new figures were revealed during a press conference at Downing Street today.

ITV News Royal Editor Chris Ship tweeted: “The NEW variant – the virulent one – is now responsive for more than 60 percent of cases in London and East England.

“In other words, it’s taken over from the old variant.”

The UK has been one of the worst hit countries in the world during the pandemic with the total number of infections reaching more than two million.

Yesterday, there were 489 deaths bringing the overall death toll to 67,075.

Announcing the new tier system for London and the south, Mr Johnson said the country will have to change the current Christmas plans.

During the Downing Street briefing, Mr Johnson said: “We must, I’m afraid, look again at Christmas.

“As Prime Minister, it’s my duty to take difficult decisions and do what is right to protect the people of this country.

“Given the early evidence we have on this new variant of the virus, it is with a heavy heart that we cannot continue with Christmas as planned.

“In England, those living in Tier 4 areas, should not mix with anyone outside their household at Christmas.”