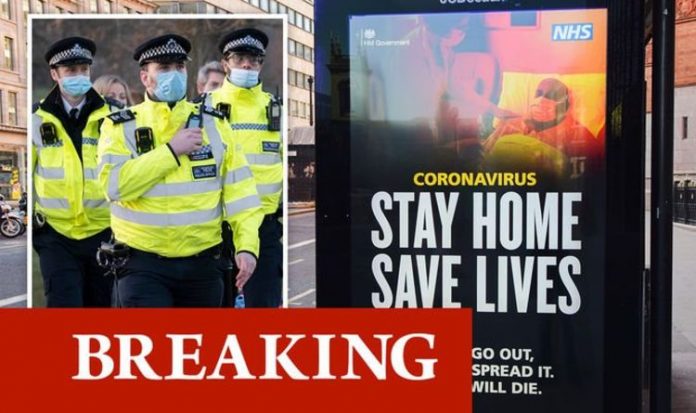 A week after Prime Minister Boris Johnson plunged England into its third national lockdown, ministers are considering tighter coronavirus restrictions which could see masks being mandatory everywhere and even scrapping vital support bubbles.

Rules banning people from different households who are not in a support bubble from exercising together are also under discussion.

These proposed restrictions would bring the country in line with the measures first introduced back in March.

A Government source said allowing two people from different households to meet for exercise was “being used as an excuse for people to go for a coffee in the park with their friends”.

They added: “It may be we tighten up on things like that.”

Former footballer Gary Neville has lashed out at proposed tighter restrictions claiming they could ban people leaving their home more than once a week.

He tweeted: “News of a stricter lockdown being introduced.

“Speculation includes only leaving your house ONCE a week and NO support bubbles at all.

“Lack of trust , no clear plan and changing instructions weekly means confidence in the message has gone and people just aren’t listening to them!

However, Professor Peter Horby, chairman of the New and Emerging Respiratory Virus Threats Advisory Group, warned measures might have to be tightened.

He said: “Now we’re in a situation where everything that was risky in the past is now more risky so we are going to have to be very, very strict about the measures.

“Whether the current restrictions are enough, I think it remains to be seen.

“It will be a week or two before it becomes clear.

“They may be sufficient but we have to be very vigilant and if there’s any sign that they’re not, then we’re going to have to be even stricter I’m afraid.”

Former World Health Organisation (WHO) director, Anthony Costello, said only a “total clampdown” would be enough to stop the virus.

He said: “We are in a national crisis with a pandemic out of control.

“We should have no nurseries open, no synagogues, no churches, no mosques.

“We should have compulsory masks, two-metre distancing.”

It is believed March 23, the one year anniversary of the first lockdown, is likely to be the realistic date for when restrictions are lifted.

The UK has been one of the worst hit countries in the world and cases continue to rise at an alarming rate.

The death toll across the country has now surpassed 80,000 with infections rising to more than three million.