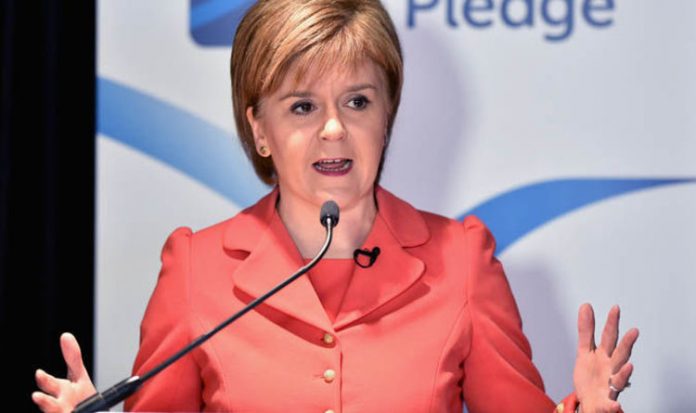 The SNP leader was urged to apologise after a new report claimed the party produced extremely inflated North Sea oil estimates to push voters to chose to leave the United Kingdom.

The Scottish Government’s forecast for North Sea oil revenue published during the 2014 independence referendum campaign showed potential revenue of £30bn more than the latest official estimates between 2016/17 and the current financial year, according to a research from the Scottish Labour party.

The massive sum almost equals the entire budget of the Edinburgh government.

A nationalist victory, they continued, would have led to “huge cuts” to schools and hospitals to make ends meet.

Jackie Baillie, a Scottish Labour MSP, said: “That would have led to turbo-charged austerity on an unprecedented scale, with huge cuts to schools, hospitals and social welfare programmes.

“These figures were baked into the promises the SNP made to some of the poorest communities in our country.

“It was nothing more than snake oil.

“Nicola Sturgeon should be apologising for the people of Scotland for misleading them on an industrial scale.”

Scotland voted on September 18 2014, when 55.30 percent of voters chose to remain part of the union.

But none of them showed realistic figures, with the most pessimistic forecast claiming £19bn more revenues than the latest projections by the independent fiscal watchdog Office for Budgetary Responsbility (OBR).

Ms Sturgeon also predicted Scotland was on the verge of a “second oil boom”, with prices between £6.8billion and £7.9bn of revenues in the first year of independence.

According to the SNP, oil and gas would have been an independence “bonus” rather than a necessity, a claim Ms Baillie dismissed as “simply a lie”.

In the run-up to the referendum, Scotland had a significant annual deficit, which has since grown to £15bn – higher than Greece’s.

Andrew Wilson, a former SNP who led a commission charged by Ms Sturgeon with creating a new economic case for separation, had already admitted in early 2017 the Scottish government was “baking” the numbers of oil revenues.

He said: “I think people – if one was critical of the 2014 campaign – you know, for example, they would argue that oil was a bonus and not the basis, but we did have oil baked into the numbers and it was indeed a basis.

The Labour research added the SNP’s predictions for North Sea revenues were inflated by billions.

According to the Scottish National Party forecast, in 2016/2017 the oil revenues would have been up to £10.7bn – but OBR figures show they amounted to £100m.

Scottish Labour used the same assumptions as the SNP analysis to extrapolate a figure for the current financial year, for which Ms Sturgeon’s party said the oil would have brought in some £9.5bn, while latest OBR forecasts predict only £900m.

Labour accused the SNP figures of having a “£30bn black hole in them”, as over three years the national party claimed up to £32bn would be generated, but only cashed in £2.1bn.

But Kirsty Blackman, the SNP’s economy spokesman, said: “The people of Scotland deserve an apology from Labour – who shamelessly told us voting against independence would protect our EU membership but are now working hand-in-hand with the Tories to drag us off the Brexit cliff edge against our will.”