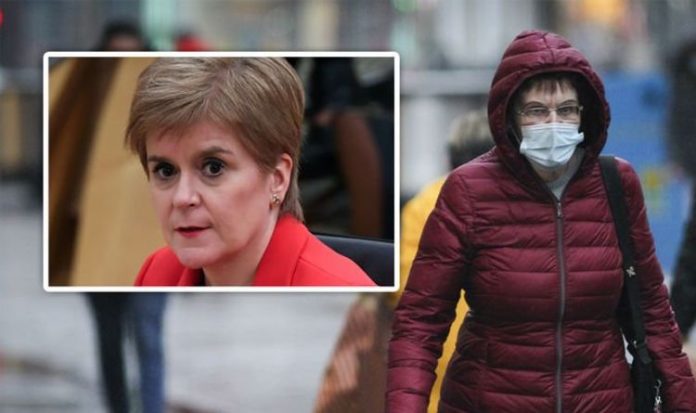 Nicola Sturgeon was quick to one up Boris Johnson introducing tough Level Four measures. The First Minister introduced the toughest level of restrictions for Scotland on Wednesday, which sees Scots barred from indoor socialising and non-essential businesses forced to close their doors. However, despite putting Scotland into Level Four restrictions, Ms Sturgeon has allowed schools to remain open.

Larry Flanagan, the EIS General Secretary said: “Our members want to be in schools working with pupils, but they also want pupils and staff to be safe.

“The Scottish Government’s rejection of remote or blended learning for schools in areas with high rates of infection has increased the level of risk for pupils, teachers and their families.

“It is time for the Scottish Government to rethink this damaging policy, with the danger of increasing rates of community infection throughout the winter months.”

Mr Johnson said yesterday from Downing Street “a shorter Christmas is going to be a safer Christmas” while explaining the eased restrictions will go ahead.

He added: “When we say three households can meet on five days, I want to stress, these are maximums, not targets to aim for, and it’s always going to be safest to minimise the number of people you meet.

“If that means you’re visiting others, we’re asking you, for the five days beforehand, as early as Friday, to reduce the number of people you’re in contact with to the lowest possible.”

Ms Sturgeon said yesterday the Scottish Government, while still allowing up to three households to mix from December 23 to December 27, has introduced the toughest possible measures in all 11 local council areas to curb rising coronavirus cases and deaths.

She said: “If you haven’t made plans to form a bubble, please don’t.

“If you are still swithering, please decide against. And if you have made plans but think they are not really essential, please think about postponing until later in the year.

“The reality is that this Christmas simply can’t be normal. But we have every reason to hope that next year’s will be much more normal.”

READ  Tackling COVID-19 together through the ACT-Accelerator

The Scottish First Minister stopped short of advising against the three household plan, accepting it would not be fair or realistic at this stage to remove that flexibility.

Mr Drakeford however said the Welsh Government would be advising only two households should meet ahead of the bubble period.

Dr Andrew Lee, global health expert from Sheffield University, said to BBC Scotland the national leaders “are all trying to avoid being The Grinch”, but warned “the numbers aren’t looking good”.

He added: “If we have super-spreading over Christmas, we will have a bumper number of infections come January.”