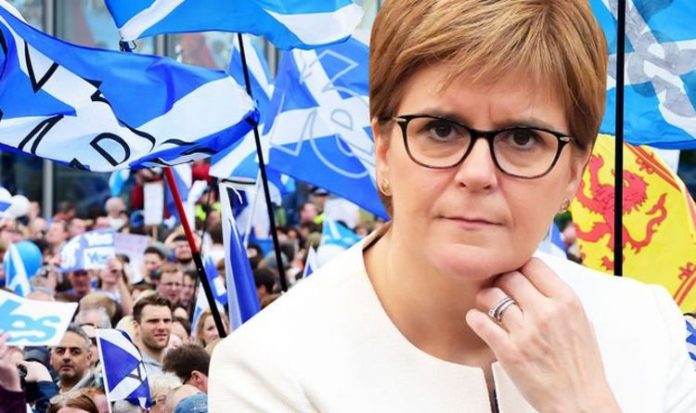 The SNP’s polling success in recent months hasn’t been enough to thwart internal squabbling – highlighted by the sacking of two prominent figures in the party. Last weekend, front bench MP Neale Hanvey was removed as the party’s Westminster vaccine spokesman after a row with Kirsty Blackman. Mr Hanvey had backed a campaign to sue his colleague after a disagreement over transgender rights. On top of this, an SNP reshuffle led to the sacking of Joanna Cherry last week – she is another figure who has come to blows with Ms Blackman over the issue of transgender rights.

With reports also highlighting the division between supporters of Alex Salmond and Nicola Sturgeon within the SNP, insiders have indicated that the atmosphere has become “vicious”.

This wording was used to describe the aftermath of a row between Marco Biagi, a former MSP who ran to be selected as a candidate in this year’s Holyrood elections, and SNP MP Stewart McDonald.

The two figures clashed on Twitter recently, as Mr Biagi sought to challenge Mr McDonald’s ally – Angus Robertson – in the Edinburgh Central seat this May.

The seat is currently held by Leader of the Conservative Party in the Scottish Parliament – Ruth Davidson.

Mr Robertson won the nomination, but only after a big bust-up in the SNP.

Ms Cherry also wanted to run for the nomination in Edinburgh Central, until a sudden rule change was handed down by the party’s National Executive Committee which blocked her from standing unless she gave up her Westminster seat.

Ms Cherry withdrew, later claiming she had been “hobbled” by the party before Mr Biagi entered the race.

One constituency party member told The Scotsman: “It has been vicious to be honest.

“People like Angus, he’s very personable and they respect his abilities, but they also like Marco and know him from his time as an MSP before, and it doesn’t feel like he’s parachuting into the constituency.

“There are also a lot of people very unhappy with the way the party interfered to block Joanna from standing.

For now, the SNP’s internal politics haven’t hampered their progress both on an election and independence front.

In recent months, 20 consecutive polls have put a Yes vote in a second independence referendum ahead.

A Datawrapper model, reported on by the New Statesman, showed polling from January 13 putting the SNP on course for 53 percent of the vote.

The Scottish Tories and Scottish Labour languished on around 19 and 18 percent respectively.