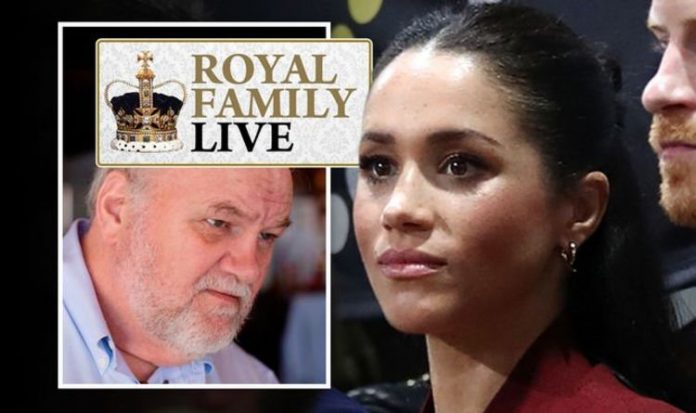 The Duchess of Sussex, who is living in California with Prince Harry after quitting royal duties last year, will today hear whether her bid to have parts of her privacy claim against The Mail on Sunday and MailOnline resolved without a trial has been successful. Meghan, 39, is suing publisher Associated Newspapers Limited (ANL) over a series of articles which reproduced sections of a handwritten letter she sent to 76-year-old Mr Markle in August 2018.

The former actress is seeking damages for alleged misuse of private information, copyright infringement and breach of the Data Protection Act over five articles, published in February 2019, which included extracts from the “private and confidential” letter to her estranged father, who lives in Mexico.

Her lawyers argue ANL has “no prospect” of defending her claim for misuse of private information and alleged breach of copyright over the publication of the letter.

At a remote High Court hearing in January, ex-Suits star Meghan’s lawyers asked Mr Justice Warby to grant “summary judgment” in relation to her privacy and copyright claims, which would see those parts of the case resolved without a trial.

During the two-day hearing, Justin Rushbrooke QC, representing Meghan, described the letter as “a heartfelt plea from an anguished daughter to her father”.

He said the “contents and character of the letter were intrinsically private, personal and sensitive in nature” and that Meghan therefore “had a reasonable expectation of privacy in respect of the contents of the letter”.

However, ANL claims Harry’s wife wrote the letter “with a view to it being disclosed publicly at some future point” in order to “defend her against charges of being an uncaring or unloving daughter”, which she denies.

READ  'The price will always be too high' - UK

The judge will deliver his ruling at 4pm on Thursday.

Correspondence between Diana and the Duke of Edinburgh showed the pair were on good terms during the breakdown of her relationship with the Prince of Wales.

In the affectionate letters, reported by Woman & Home, Philip signed off as ‘Pa’.

7.25am update: Eugenie given ‘free pass’ Meghan and Harry ‘could only dream of’ with royal baby

Princess Eugenie may have been given a “free pass” that Meghan Markle and Prince Harry “could only dream of” following the birth of her baby boy, according to a royal expert.

Royal expert Daniela Elser claimed Eugenie was able to enjoy more freedom to share her happy news in her own way as she is further down the royal line of ascent compared to the Duke and Duchess of Sussex.

She wrote in NZ Herald: “There are two key takeaways here firstly and most obviously, that Eugenie is getting the sort of free pass that Harry and Meghan could only dream about and does not come down to hypocrisy but the unassailable fact that to be part of the royal family is to accept that there is no such thing as a level playing field.”