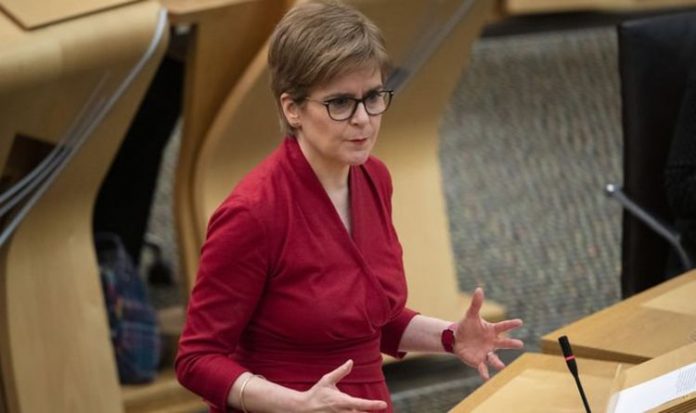 Scottish First Minister Nicola Sturgeon was branded “completely delusional” and told she cannot “cherry pick all the good bits” about being part of the UK when she was asked if the vaccine rollout was proof of the benefits of remaining in the Union. Speaking to ITV’s Robert Peston, she said: “Look, we work together on certain things, just as on the European Union they will work together through the European Medicines Agency and if Scotland was independent right now, we would probably still choose to work together on things like drugs and vaccine approval, because it makes sense to do that given our geography.”

But furious Twitter critics hit back asking Ms Sturgeon what she would do if the UK didn’t want to work with a Scotland, which ripped apart the Union.

One said: “That assumes that the London government would be interested in working together with a foreign state.

“Maybe it would, maybe not. What input has Dublin had into the UK government’s decision, given the shared RoI-UK border?”

Another added: “But would the UK want to work with you after destroying our country. I wouldn’t blame the UK for telling us where to go thanks to the years of grievance.”

Another accused her of trying to have her “cake and eat it”.

“Any chance of grievance or to put a spanner in the works she takes it. Not fit for purpose.”

A Twitter user posted: “So what she’s saying is it’s better to work together like we currently do?

Another said: “If she believes that she’s completely deluded, ( we new that I think) why on earth would the rest of UK have any interest in helping a country that told them to f*** off, and prob told them to get lost on paying back any of the £££’s thrown at Scotland by the UK.”

A critic tweeted: “Note she says they’d ‘choose to work together’ what if the UK government ‘chooses’ not to work with Scotland? This would just be another bargaining chip the UK would have over an independent Scotland.”

It comes after the UK became the first country in the world to approve a jab from Pfizer and BioNTech.

The move means vaccinations against COVID-19 will begin early next week.