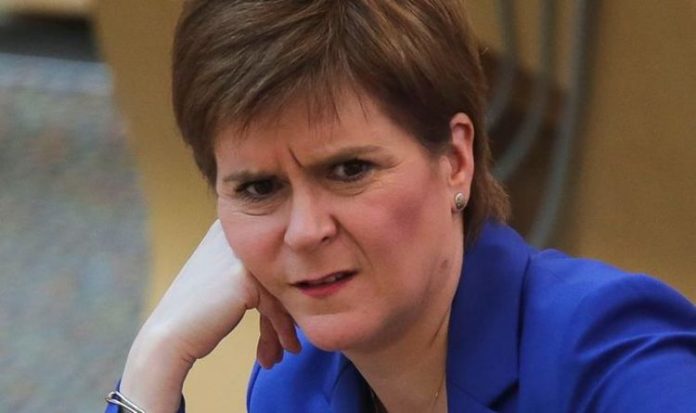 Nicola Sturgeon and the SNP Government has been savaged for its handling of Scotland’s GCSE exam results after the Scottish Qualifications Authority (SQA) downgraded 124,564 results for exams which were cancelled due to the coronavirus pandemic. Ian Murray MP raged at the SNP and insisted the party needs to “sort it out”. He explained in his Edinburgh South constituency, one school had 76 percent of its grades lowered.

Speaking to Sky News, Mr Murray said: “The Scottish Government’s issue with exam results is a national shame. What they’ve essentially done is downgraded people because of their postcodes.

“If you go to a school in a deprived area, there’s been a deprivation algorithm applied to that school so the grades teachers gave on coursework have been downgraded because the Scottish Government have essentially said you should know your place and you don’t deserve those higher grades.

“It’s a complete disgrace from the Scottish Government and it’s only been because the Labour Opposition has placed a lot of confidence in the Education Secretary in Scotland.

“They’ve doubled down on this deprivation algorithm.

“One of the schools in my own constituency, 76 percent of grades were downgraded which put the entire school 9 percent lower than their grades last year.

“This is a wonderfully improving school with a really inspirational headteacher and if you compare that with the most affluent schools, their grades were only reduced by 12 percent.

“It’s writing off a generation and it should be a national shame.

“The Scottish Government have either got to sort this or the Education Secretary has to leave someone else to do it.”

Scottish Labour will this week table a motion of no-confidence in Mr Swinney, who is also the Deputy First Minister, which will be supported by the Scottish Conservatives.

Ahead of the vote, Mr Swinney said he had “heard the anger of students who feel their hard work has been taken away” and said he was “determined to address it”.

He added: “These are unprecedented times and as we have said throughout this pandemic, we will not get everything right the first time.

“Every student deserves a grade that reflects the work they have done, and that is what I want to achieve.

I have been engaged in detailed discussions over the way forward and I know that we need to act and act quickly to give certainty to our young people. “I will set out on Tuesday how we intend to achieve that.”