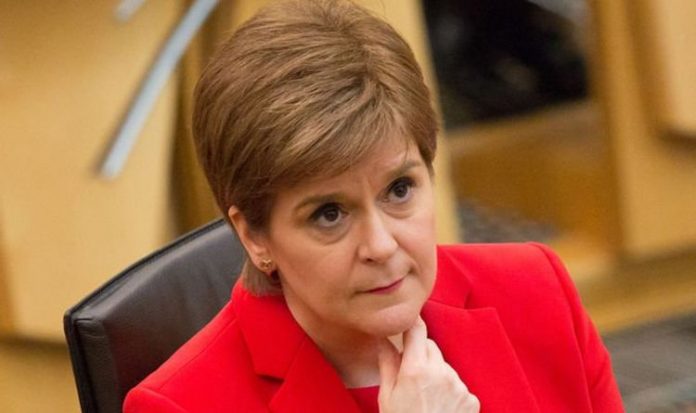 Rachel Watson, who is the Scottish Daily Mail Deputy Political Editor, warned that polls were emerging which showed the Scottish electorate was having doubts over the unity of the SNP. A Savanta ComRes poll of 1,000 Scots found 42 percent believed the SNP were united in February, a drop from 8 percent in January. Rachel Watson warned Alex Salmond’s inquiry into the handling of his sexual harassment allegation came at an unfortunate time as more details are set to be released in the coming weeks while the SNP and Nicola Sturgeon begin their election campaign.

Speaking on BBC Newsnight, Ms Watson said: “You know, we’re just weeks away in Scotland tonight from the Scottish Parliament elections and I think this has come at a really bad time for Nicola Sturgeon.

“The Parliament dissolves next month and we get into the campaign and we’re going to have Alex Salmond’s evidence potentially appealing at the committee or at a press conference.

“Nicola Sturgeon still has to appear the committee and the report has to come out.

“We have the ministerial inquiry findings that will be published at some point soon as well and recently a poll showed that growing numbers of people in Scotland, don’t feel that the SNP are united.

“And I think this is coming at a really difficult time for the SNP, yes Nicola Sturgeon has fared well throughout the pandemic but you know recently she was criticised over the vaccine rollout and there have been criticisms creeping in.

“So I think you know this is all very difficult point for the SNP and I think it all hinges now on them.

“There’s another part to independence as well which is the UK Government and whether they give the go-ahead for one which Boris Johnson has said that he’s not going to do.”

Mr Salmond was accused of sexual harassment and was subject to a Government investigation.

He was later awarded £500,000 by the Scottish High Court after the Government admitted they acted unlawfully when they were investigating those claims of sexual harassment.

He was cleared of all charges.

The inquiry is now looking at what went wrong and is focusing on the role Nicola Sturgeon and other SNP members played in handling Mr Salmond’s case.

Mr Salmond has continually postponed appearing at the inquiry to give evidence but has submitted written evidence to the investigation.

In it, he claims there was a conspiracy within government and the SNP against him which ultimately wanted to see him imprisoned.

Ms Sturgeon was also named in Mr Salmond’s accusations as he believes she broke the ministerial code by lying to Parliament over when she found out about his sexual harassment allegations.

The SNP are due to begin campaigning for the May 6 elections.

Nicola Sturgeon warned Westminster she would push ahead with an independence referendum regardless of their approval.