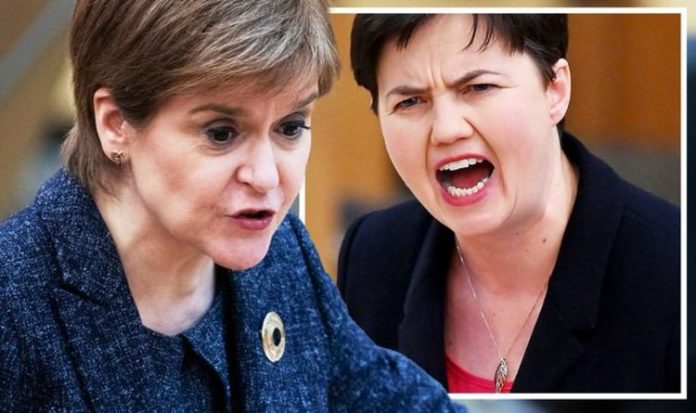 The First Minister’s Scottish National Party (SNP) faced backlash this week after heavyweight MP Joanna Cherry accused the outfit of “Stalinist revisionism”. Ms Cherry, who was the SNP’s justice and home affairs spokesperson in Westminster, was removed from her post by Ms Sturgeon in what critics have described as a “ruthless purge”. The former MP drew parallels with the sacking of previous First Minister Alex Salmond, who Ms Sturgeon is currently embroiled in a bitter legal case.

Some reports suggest Ms Cherry’s abrupt dismissal was a reaction to her close allegiance to Mr Salmond, who recently hinted that he might refuse to be a witness in a trial over Holyrood’s refusal to publish his allegations against Ms Sturgeon.

The First Minister last week announced her plans to hold a “legal referendum” if the SNP wins a majority in this May’s Holyrood elections.

Shortly after, she outlined her party’s 11-point plan that would help push Scotland towards independence, a “plan B” should a direct path fail to materialise.

Ms Cherry, one of the SNPs top officials, told reporters when talking about her dismissal that she had been unaware of the plan for forcing a second independence referendum until she had read reports of it.

She added: “There is no functioning link between MPs and the leadership.”

Concerns over to what extent Ms Sturgeon will go to achieve her ambition of independence has drawn vast criticism in recent years.

Many fear that rushing the process will result in new fully devolved rules and regulations to the detriment of Scottish people.

Some of these fears were voiced by Holyrood’s opposition leader, Scottish Conservative Ruth Davidson.

In a 2015 piece for the Scottish Mail on Sunday, she warned the SNP’s promise of a “cost-free all-expenses-paid option which would somehow sweep the natural laws of economics aside” was false.

Describing Ms Sturgeon’s plans as “fantasy economics” she sounded the alarm that Scottish people could be at risk from danger coming through the back door, with increased taxes and cuts in public spending.

Writing a year after the 2014 independence with a general election around the corner, Ms Davidson said: “How much would independence cost? Treasury analysis – which has been unchallenged by the SNP – found this week that by the end of this decade, the Sturgeon plan would add extra debt interest of £5billion.

“That’s £5billion every year going to foreign lenders, rather than to schools and hospitals. This she calls social justice.

“That, however, is just stage one. Stage two comes if the SNP gets its way to impose independence by the back door.

“Ms Sturgeon has confirmed this week that separation remains her goal, and has refused to rule out another referendum soon.

“But, in the meantime, the goal is to settle for what the Nationalists call ‘full fiscal autonomy’.

“Under this plan, we’d remain in Britain, but all the financial ties we currently share with the rest of the UK would be severed.

“And Scotland’s system of public services would rest entirely on the shoulders of the poor, benighted Scottish taxpayer.”

Scotland independence: Sturgeon has suggested she could hold a ‘legal referendum’ as soon as May (Image: GETTY)

Full fiscal autonomy means Scotland would have to borrow considerable amounts of money from external lenders in order to invigorate its own economy.

Scotland, a country that voted to remain in the EU, has said it would rejoin the bloc to receive external funding.

Yet many have noted signing back up to Brussels would immediately throw aside many of the arguments for independence: democratic control, national self-determination and identity and full political decision making transferred to Holyrood.

Paul Embery, a leading trade unionist and Labour member, told Express.co.uk it was a black hole in the SNP’s policy handbook that opposition parties have failed to call out.

He said: “It’s the policy on independence and the EU, they’re completely inconsistent.

“The SNP say they want to be independent from Britain because they think they’ll be better off outside, yet the first thing they’d do is hop back into bed with the Europeans and trade their newly-found sovereignty for membership of the EU club.

“It’s always struck me as completely bizarre and I don’t think they’re ever probed enough on it.”

If successful in its application, Scotland would have to adopt a number of things required by the EU for new member states, like the euro.

Ian Blackford, leader of the SNP in the Commons, in 2019 assured voters Scotland wouldn’t “necessarily” have to adopt the euro, a point which has since been disproven.

The EU has repeatedly confirmed that joining the Exchange Rate Mechanism isn’t voluntary, with former European Commission President Jean-Claude Juncker having said in 2018: “The euro is meant to be the single currency of the European Union as a whole.

“All but two of our member states are required and entitled to join the euro once they fulfil the conditions.”

If an independent Scotland seeking to sign up to the EU refused to adopt the euro, it would find itself “not fully compatible” with the Treaty on the Functioning of the European Union – a key piece of EU law.

And this is on the assumption that the EU would even accept Scotland as an independent country.

Last month, she wrote on the SNP’s website: “As an independent member of the EU, Scotland would be a partner and a bridge-builder.

She has since suggested the bloc would welcome Scotland with “open arms”.

Robert Tombs: The historian said the EU would unlikely accept an independent Scotland into the bloc (Image: Penguin)

Yet, as historian Robert Tombs told Express.co.uk, Brussels might view Scotland as not worth the trouble.

‘This Sovereign Isle’, published by Allen Lane, is out now.