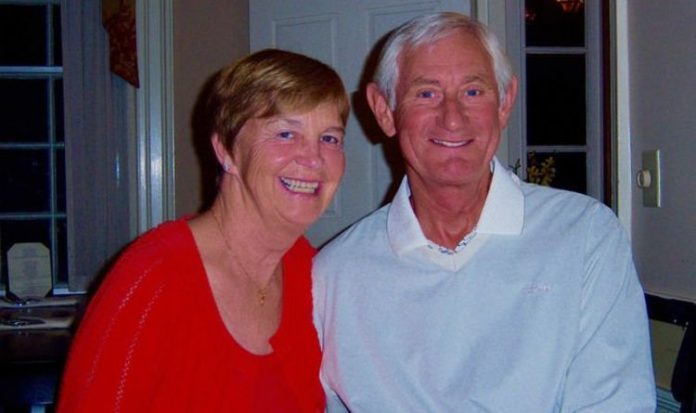 Judith launched the charity after her husband fell ill with dementia (Image: Collect)

In 2014, ex-Middlesbrough defender Bill Gates was diagnosed with chronic traumatic encephalopathy (CTE), also caused by repeated head impacts. Day-by-day wife Judith, 75, has seen the “lights dim” in her husband’s eyes but it’s lit a fire within her family – to wake sports up to “the fragility of the brain”. Now she’s told us her ‘Head For Change’ charity is not fighting a “blame game” but for “the future of the game” and generations of new sports stars.

The mother-of-two told the Daily Express: “I can still conjure up in my minds eye the image of Bill as a footballer in the 1970s.

“Sitting alongside my two proud sons, we delighted to see him emerging from the dressing room onto the field – a Titan in our eyes.

“Conversely I am haunted by his image today. Physically fit but his life spark almost extinguished, replaced by bewilderment and confusion.

“Our Titan is no more. The game that strengthened him is destroying him, brain cell by brain cell.”

She explained: “Bill has always said in his 40s, 50s and 60s he feared he would suffer dementia due to all balls he headed.

“The professional football-playing generation ahead of him, Bill was watching in horror as they suffered from, and died from, dementia.

“We have recognised that was a possibility for Bill for years and it’s been a challenging to deal with – but sadly not a surprise.

“What makes is more tragic Bill and other retired sports people are often suffering neurodegenerative disease but in an active body.

“This is the brutality of the disease; they are fit and healthy so live longer with this dementia.

“The light in my husband’s eyes dims every day. I hope no future player or family to endure ‘the long goodbye’ we’re living through.

“He’s losing his sense of self and we his family are losing a life partner, a caring dad and an indulgent grandad.

“I want everyone to recognise the fragility of the brain. I want to tell young players they are not indestructible.”

Bill and Judith married in 1961 and he played exclusively for Middlesborough from 1961-1974 playing over 350 games, mainly at centre half.

Bill and Judith with their family, who are caring for the beloved dad (Image: Collect)

Judith explains: “He was known for being strong in the air. He made the decision to retire in 1974 because he was having increasing migraines.

“Football doctors at the time gave us the message ‘it goes with the territory’.

“He was heading up to 100 balls a day in training, feeling woozy and getting given smelling salts.

“We later found smelling salts is the worst thing you can give for the brain after suffering trauma but that was the pattern of behaviour in those days.

“He was never knocked unconscious in a game but over a long period of time he suffered repetitive head injuries.”

When Bill quit the game he launched a successful chain of sports shops across the North-East of England which he sold in 1989.

Bill was the Youth England Captain during his early years (Image: Collect)

The family divide their time between Co Durham, the Cayman Islands – where they have full citizenship – and the US.

In the years since fully retiring the couple have lived an active life, hiking the Inca trail and trekking to see mountain gorillas in Uganda.

They have also actively been involved with sports coaches in Africa and India, as part son Nick’s ‘Coaches Across Continents’ non-profit organisation.

Bill’s travelled the globe with ‘Coaches Across Continents’ who use sport for education, conflict prevention and child and environment protection.

She explained: “His physical health allowed him to do all that but always hanging over us was the spectre of his head injuries.

Despite Bill’s dementia he is involved in ‘Caches Across Continents’ charity (Image: Collect)

“He started to show signs of dementia about nine years ago and had his first diagnosis of neurological impairment in 2014.

“Then we had a more definitive CTE diagnosis in 2016 and given his previous history only as a result of repetitive head injuries.

“We made a conscious decision to optimise Bill’s life and enjoyment for as long as possible and view our fight as his legacy.”

The charity has enlisted the family of the late Nobby Stiles, himself stricken with Alzheimer’s and vascular dementia, to be their ambassadors.

Speaking to us from the Cayman Islands, Judith explained how Bill every day they are losing a small bit of Bill.

She said: “Right now Bill is making a fruit plate for my son and I, we call it ‘Bill’s Job’ as we are creating a pattern of behaviour.

“But to do it we have to get the fruit out of the fridge, we have to put the knife and chopping board out and the number of plates out.

“Yet everyday he is forgetting how to do something. I didn’t realise what the human brain can know until I saw what Bill is forgetting.

“A computer is like a brain but I wouldn’t use my iPad as a squash racket.”

Head For Change’ wants to encourage independent research into sports brain injuries and provide support networks and advice for families.

She added: “We cannot wait decades for reports to confirm absolute causation – we need to accept a burden of proof.

“Bill said to me recently ‘I know you are just trying to make the world a better place for players and their families’.

“That means the world to me.”

*To get involved, find help or donate visit https://headforchange.org.uk/