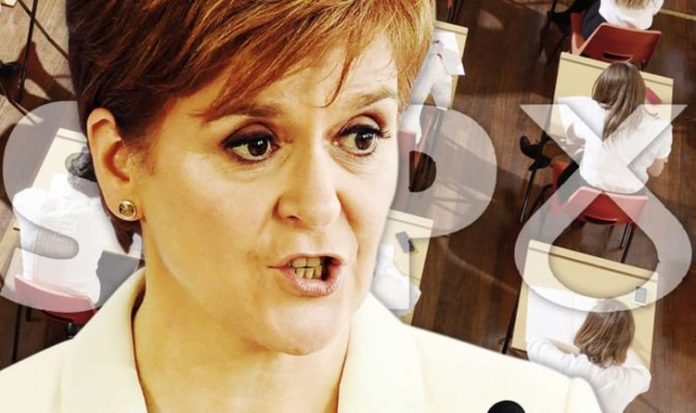 He said: “I am absolutely furious at the SQA and Scottish Government after yesterday’s exam results.

“Because I live in a poorer area, how does that mean that I get lower grades than someone who lives in a more affluent area?

“Especially when I have not sat the exam.

“It is hard to put into words how let down I feel and I am sure the majority of other young Scots feel exactly the same.”

READ MORE: Nicola Sturgeon has ‘backed herself into a corner’ SNP have no plan B

Mr White continued: “The SQA and the Scottish Government were warned at the start that the system was flawed by teachers and parents.

“They did not try and engage with young people, the SQA and Scottish Government have let down a whole generation.

“The worst thing about it is the arrogance to blame teachers and they have stuck their feet in the mud defending the system that has failed us all.”

On Tuesday the school results sparked outrage at the SNP’s handling of Scotland’s education system and many people took to Twitter to share their frustration at Nicola Sturgeon, leading to the hashtag #ResignSturgeon trending in the UK.

Another tweeted: “This is a disgrace – unfairly penalising the next generation. It’s time to #ResignSturgeon.”

A fifth said: “The whole point about Scottish education was that you could be born in a council house on a sink estate and still get to university and make a better life for yourself if you worked hard.

“@theSNP have destroyed that. #ResignSturgeon.”

Another worte: “Can’t believe as a lifelong SNP voter I am about to do this, but on behalf of the disheartened over-achievers from Scotland’s 285th ranked school, who dared to believe hard work would pay off, I say #resignsturgeon.”