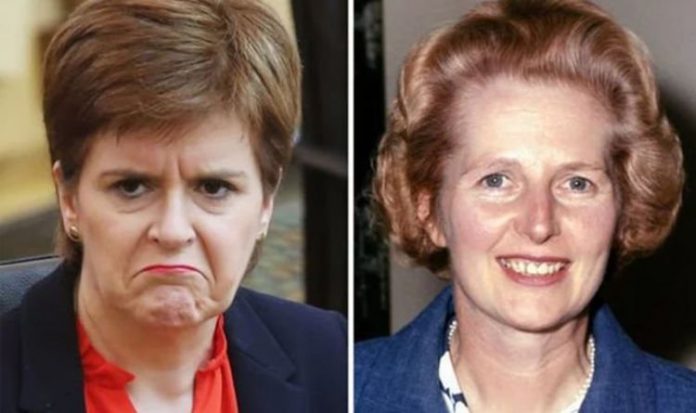 Scottish First Minister Nicola Sturgeon has said she will hold an advisory referendum on independence if her Scottish National Party (SNP) wins a majority in May’s Holyrood elections, regardless of what Prime Minister Boris Johnson thinks about. Her party has set out an 11-point roadmap for taking forward another vote, which was presented to members of the SNP’s national assembly on Sunday. The SNP leader told the BBC’s Andrew Marr: “I want to have a legal referendum, that’s what I’m going to seek the authority of the Scottish people for in May and if they give me that authority that’s what I intend to do: to have a legal referendum to give people the right to choose.

It comes as four-nation polling for the Sunday Times found that a majority of voters in Scotland and Northern Ireland want referendums on the breakup of Britain.

The SNP’s goal is for Scotland to leave the UK so the country can rejoin the EU.

However, there are several questions hanging over whether the country would even be able to join as an independent state.

New members can only be allowed into the bloc through a unanimous vote from the existing member states and an independent Scotland would undoubtedly ruffle feathers.

Scotland could also be rejected due to its current deficit of seven percent of GDP, unless it adopted a strict austerity programme from the EU as well as the euro.

In an exclusive interview with Express.co.uk, constitutional historian Vernon Bogdanor claimed Ms Sturgeon won’t be denied entry but argued an independent Scotland might have to rejoin the bloc without the cash rebate negotiated by Margaret Thatcher in the Eighties and by agreeing to adopt the euro.

“Scotland joining the euro would cause lots of problems because their current budget deficit is around seven percent. And they would have to reduce it to three percent, under current EU rules.

All EU countries contribute to the bloc’s budget, and in return benefit from Brussels spending in their countries.

Because the bulk of the EU budget is spent on the Common Agricultural Policy (CAP), which supports farmers’ incomes, countries with a large agricultural sector generally get more back than they put in.

Large countries like Germany are net contributors to the EU budget.

Britain used to be one.

However, in 1984, former Prime Minister Margaret Thatcher negotiated a reduction of two-thirds in the UK’s net contribution, to be paid by other EU members, on the grounds that the agricultural subsidies favour small farmers.

There are millions of smallholders in France, who designed the system, and very few in Britain and even fewer in Scotland.

Ms Sturgeon has in the past been accused of stealing lines from the Iron Lady.

In 2015, the SNP launched a series of new adverts, featuring a picture of Ms Sturgeon alongside the slogan: “Don’t just hope for a better Scotland. Vote for one.”

In the 1979 election campaign, the Conservatives, then led by Mrs Thatcher, put up similar posters with their leader telling voters: “Don’t just hope for a better life. Vote for one.”

DON’T MISS:
EU in huge swipe at UK as bloc opens door to Wall Street [REVEALED]
French fisherman blames EU for depending so much on UK waters [INSIGHT]
EU braced for pandemonium as three countries tipped to leave bloc [EXCLUSIVE]

Former Scottish Labour deputy leader and campaign director Alex Rowley said at the time: “We knew the SNP under Nicola Sturgeon had ditched the left-wing rhetoric, but we didn’t expect them to start stealing Thatcher’s lines.

“I’m sure Nicola Sturgeon will cringe at the idea of being compared to Margaret Thatcher – someone in SNP HQ will be getting the hairdryer treatment.”

Mr Rowley added: “In May, rather than voting for hundreds of millions of pounds of cuts to schools and services, Scots can vote for a Scottish Labour Government that can stop the cuts.”

Ms Sturgeon dismissed the comparison between her billboard and the Tory one from 37 years ago.

She said: “If Labour are saying that it just shows beyond any doubt how desperate Labour are.

“We’re fighting a positive campaign, full of hope and optimism about the future of Scotland.

“As we go into the final 10 days of this campaign I’m taking nothing for granted.

“But I’m thoroughly enjoying this campaign and I’m looking forward to the remainder of it.”