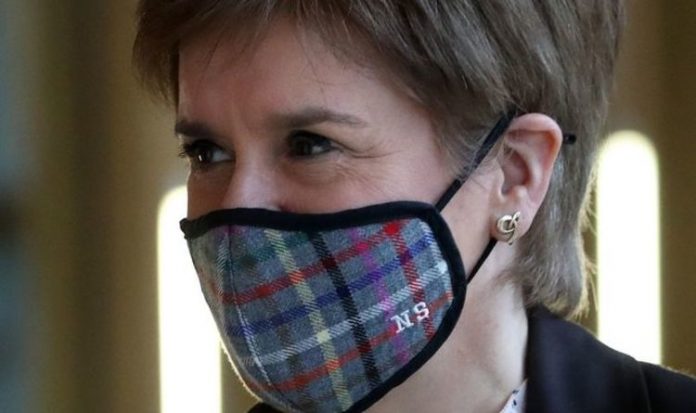 Vaccine: Reporter says weather is a ‘real concern’ for rollout

The SNP leader has been urged to accelerate the roll-out after it emerged the country was already falling behind England in delivering vaccinations. Figures published earlier this week revealed a widening gap between the four UK nations. Around 1,100 vaccination sites opened cross Scotland last Monday, mainly at GP surgeries, but doctors said it was unclear when doses would arrive.

Ian Lakin, a Scottish businessman and former chairman of the pro-UK Better Together campaign, lashed out the First Minister over her vaccine plan.

He tweeted: “Another empty announcement by Nicola Sturgeon exposed.

“She promised one million doses by end January – then revised down to 560,000 and now that seems unlikely to be achieved.

“Why? Mass vaccines centres will not open until the 15th February due to a lack of a proper roll-out programme.”

“This one is hyper-crucial and should spell the end for those in charge.

“Vaccines are the only thing to allow us back to normal life, this couldn’t be more urgent.”

Another tweeted: “Not prepared, not competent, not bothered!”

And another said: “Failure to prepare is preparing to fail! It’s the SNP mantra.

“They’ve had months to plan and recruit. We knew a vaccine would come, it was just a question of when.

“Didn’t prevent them from getting their ducks in a row!”

Scottish Conservatives health spokesman Donald Cameron warned the daily vaccination figure of 12,500 meant the Scottish Government would miss its target of giving the injection to 560,000 by the end of January.

He said: “These figures confirm that the SNP are not moving fast enough and lagging behind their own targets.

“At the current speed, they risk falling short of expectations.

“The vaccine is our key weapon against this virus, so we will continue to push the government to accelerate their plans and focus on increasing the pace.”

Ms Sturgeon said ministers would “look at anything and everything” to get Scotland’s vaccination programme completed as quickly as possible.

“We want to get this vaccination programme completed as quickly as possible, it is not in the government’s interests to slow this down, it is in our interests to get it speeded up as far as practical.

The UK has given almost 3 million people a first dose of a Covid-19 vaccine so far, according to the latest government statistics.