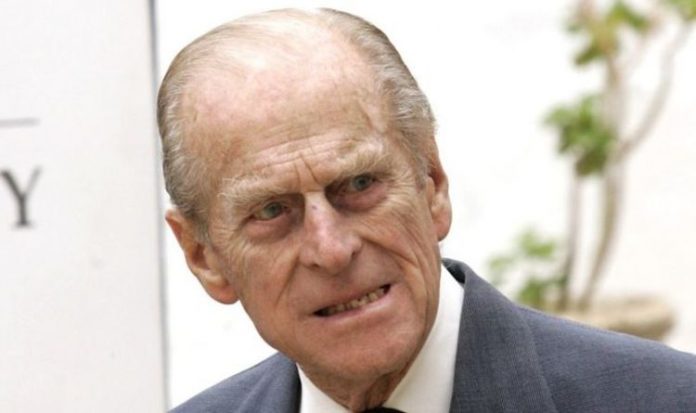 Philip is known to be one of the most uncompromising royals. Countless stories have given the impression that he isn’t one to take things lying down. The Duke of Edinburgh is especially protective over his privacy, a rare commodity for the Royal Family.

An instance of him reaching the end of his tether came during Amazon’s 2013 documentary, ‘Royalty Up Close: The Photography of Kent Gavin’.

Mr Gavin had for several years followed The Firm around, photographing them.

He told the documentary how he was once accosted by Philip while out at Windsor Great Park.

The Royal Park is managed and funded by the Crown Estate.

However, most parts of the park are open to the public free of charge.

Mr Gavin described how he was in a public part of the park taking photos of the Duke when the royal shouted at him: “Get off my land! What are you doing here?”

Philip then shouted back: “I don’t want you here.”

JUST IN: Queen rebelled against royal protocol after Palace ‘made fuss’ of jab

This was all caught on video by TV cameras.

Meanwhile, Mr Gavin said his run-in with the Prince at Windsor Great Park wasn’t the first.

He said: “What can you say about Philip? I’ve been at many, many, many occasions with him when he’s not been a happy soldier with us being around.”

He added that the Duke would rather have his privacy as often as possible.

The photographer said: “He gives you the picture but he’d rather have his privacy when it’s called for.

“It’s difficult to cut off that line of private-public.”

Philip and the Queen over the past year have lived close to one another as a result of the coronavirus pandemic.

Many note that it is the closest they have been in years.

Since his retirement in 2017, Philip spent most of his days at Wood Farm in Sandringham.

The Queen, meanwhile, continued to work from Buckingham Palace.

When the pandemic struck, the two were forced to isolate in their own protective bubble.

The pair spent Christmas 2020 alone at Windsor Castle as opposed to their regular festive lodgings in Sandringham.