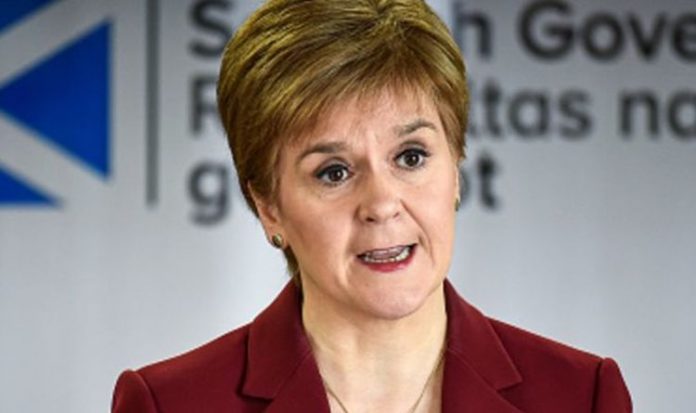 Speaking to Times Radio, the Tory MSP claimed he and his colleagues had warned the Scottish Government ahead of the publication of Scottish students’ grades that the results could spark a huge amount of appeals. Jamie Greene said Nicola Sturgeon’s plan proved to be an “absolute shambles” as he blasted the First Minister. He said: “It’s not just my assessment but it’s also the assessment of the majority of young people and their parents right across Scotland who think this has just been an absolute shambles from the start.

“I think the reason for that is that we’ve been warning for a very long time that this was going to happen.

“I sit on the education committee and we held numerous sessions during lockdown, virtual sessions, where we listened to the SQA, we grilled the Cabinet Secretary on these issues.

“I think it was quite clear a long time ago that we warned that this could happen. There could be a huge amount of appeals if it didn’t go well.

“And low and behold last week when they announced the results, given that we didn’t know what the methodology was even though we demanded that they published it, when they did publish it there were huge amounts of very unhappy young people who are staring down the barrel of a very difficult future.”

It comes as Scottish Labour tabled a motion of no confidence in the Education Secretary John Swinney following widespread criticism of the system to award grades to pupils in the absence of exams due to the coronavirus lockdown.

Both Scottish Labour and the Scottish Tories have said they will declare no confidence in Mr Swinney, with the two parties made up of a combined 54 MSPs.

The Scottish Liberal Democrats and Scottish Greens are yet to state whether they will support the motion.

The motion was tabled on Monday morning, meaning a debate is not likely to take place before Wednesday as MSPs are normally given two days’ notice ahead of a no-confidence vote.

The Scottish Qualification Authority’s moderation process saw 26.2 percent of grades changed during the moderation process based on criteria that included schools’ historic performances – with a total of 124,564 pupils’ results downgraded.

Pass rates for pupils in the most deprived data zones were reduced by 15.2 percent, compared with 6.9 percent for pupils from the most affluent backgrounds.

Both Mr Swinney and Ms Sturgeon initially defended the system, stressing that the appeals process would allow eligible pupils to challenge their results and arguing that it would not have been “credible” if teachers’ estimates were not downgraded.

But following protests from pupils in Glasgow and cross-party criticism of the system, the First Minister announced that Mr Swinney would address Parliament on Tuesday and “rectify” the situation.

She said that pupils who had their exam results downgraded will not all be expected to appeal against them, apologising to them at Monday’s coronavirus briefing.

Ms Sturgeon said that Mr Swinney still had her support and added: “When we get things wrong, I want to be able to stand here and acknowledge that and put it right, because I think fundamentally that’s better than simply digging our heels in and trying to defend a position we think in our hearts we didn’t get right.

Scottish Labour’s education spokesman Iain Gray said: “It is frankly hypocritical for the First Minister to apologise today after refusing to accept for over a week that an injustice had occurred.

“This apology is more concerned with protecting John Swinney’s job than facing up to the failures of her government.

“Scottish Labour and other parties warned the First Minister and John Swinney for months and were ignored.

“A belated and forced apology is not good enough. We need an immediate return to the grades recommended by teachers for those who saw their grades reduced.

“It’s time pupils and teachers got justice and Swinney got his jotters.”