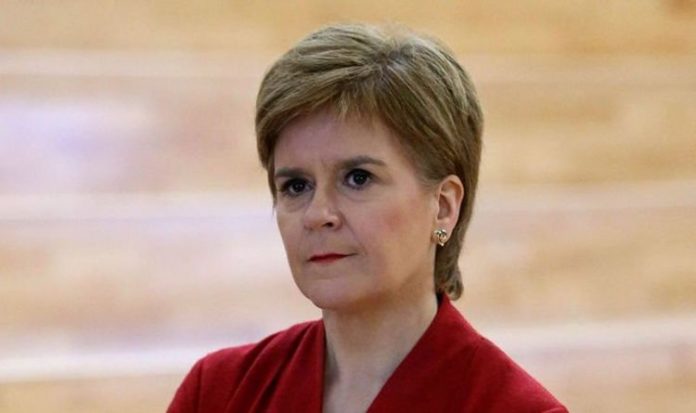 Because of the coronavirus, Scottish students like many across the UK were unable to sit their exams this summer. The SNP introduced a measure to moderate grades – the Scottish Qualifications Authority (SQA) downgraded 124,000 recommended awards – nearly a quarter of the total – after using computer models to decide results following the cancellation of all exams during lockdown. But the disastrous policy was immediately criticised for being unfair – as statistics showed the SQA had downgraded awards recommended by teachers for pupils from the poorest 20 percent of areas by more than 15 points, while recommendations for the best-off pupils were downgraded by just under 10 points.

This has sparked outrage in Scotland, with protests taking place in Glasgow and elsewhere.

The SQA promised students the right to appeal, but the confusion was worsened when it emerged that some Scottish universities had said many courses would be filled up before the SQA had ruled on those appeals.

Having defended the policy, Nicola Sturgeon has U-turned in the hope of salvaging the situation.

She said: “That burden has not fallen equally across society.

“Despite our best intentions, I do acknowledge that we did not get this right.

“I’m not prepared to have this year’s cohort of pupils, particularly from deprived communities, thinking that their hard work at school doesn’t count or the system is determined to be against them.”

Dr Azeem Ibrahim wrote a damning column this week hitting out at the First Minister’s “dumb and regressive policy”.

He said on the criteria used by the SQA: “No matter how you slice it, that is objectively a dumb criterion, and obviously a socially regressive one.

“We are no longer judging the individual achievements of students on their own merit, but we judge them by what school they went to.

“That makes a mockery of the promise of education as the surest way to attain upward social mobility.”

He added that the SNP are often judged on their push for Scottish independence rather than other policies, but that this scandal would see Ms Sturgeon “judged very harshly indeed”.

Dr Ibrahim continued in his CapX column: “Sturgeon herself has asked that she be judged on her record on education. And in her choice to defend and double down on this national travesty, we can judge her very harshly indeed.

“That England and Wales appear, bizarrely, to be following a similar path is greatly worrying. They should learn the lesson of Scotland’s miserable experience.”

Iain Gray, Scottish Labour’s education spokesman said after Ms Sturgeon’s apology: “It is frankly hypocritical for the First Minister to apologise today after refusing to accept for over a week that an injustice had occurred.

“This apology is more concerned with protecting John Swinney’s job than facing up to the failures of her government.

“A belated and forced apology is not good enough.

“We need an immediate return to the grades recommended by teachers for those who saw their grades reduced.

“It’s time pupils and teachers got justice and Swinney got his jotters.”