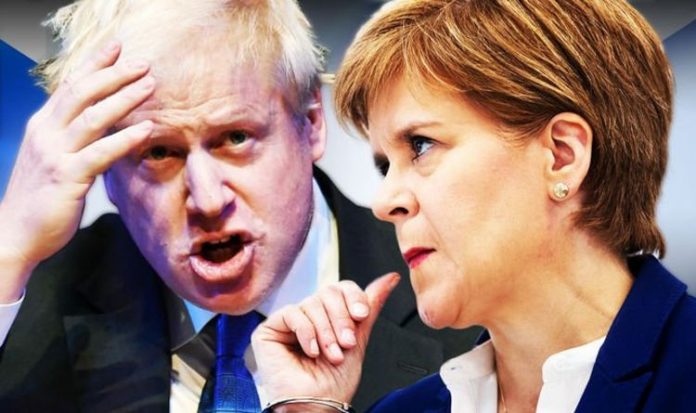 The SNP’s party conference takes place this week amid growing support for Scottish independence and ongoing rows over devolution with Westminster. Prime Minister Boris Johnson fanned the flames earlier this month when he said devolution was a “disaster”. He later clarified his comments, claiming that he was referring to “the way the SNP have handled devolution in Scotland”. In recent months, there has been sustained growth in support for Scottish independence according to multiple polls.

Mr Johnson appears to be driving some of this momentum for the SNP, as a JL Partners poll has independence ahead 56 to 44 percent, excluding those who said they did not know.

Crucially, the poll found 79 percent agreed that Prime Minister “Boris Johnson is not the leader I want to have for my country”.

The Conservative Government’s headache in Scotland will likely persist if a motion approved for debate which has been included in the draft agenda for the SNP annual conference is to be believed.

It says Ms Sturgeon and co “will not accept a Westminster veto” on IndyRef2.

The resolution does not set out what the party would do if the Prime Minister continues to refuse a new vote but it does open the prospect of further action being taken.

It has been branded ‘Plan B’, and could see the Scottish government take on Westminster in the courts if it cannot get the Prime Minister’s consent for a second vote.

Scotland had an independence referendum in 2014, in which 55 percent voted to stay in the union.

While the vote was branded a “once in a generation” chance to leave the UK, the SNP has argued that Scotland opposes Brexit after voting 63 percent to remain in the EU in 2016.

Therefore, Ms Sturgeon believes she has a mandate to hold another independence vote, something which Mr Johnson has so far rejected.

According to Professor Aileen McHarg, a public law expert, Mr Johnson’s “once in a generation” argument may not work for much longer.

She told Express.co.uk earlier this year: “What the Government is saying is that the SNP said the 2014 vote would be a once in a generation referendum, therefore we are going to hold them to that.

“The significance of any statement about it being once in a generation are highly dubious, and they have no legal standing.

“They are in no way legally binding – it’s unclear what a generation means, how long is a generation?”

Prof McHarg said that if support for independence continues its polling surge, Mr Johnson may find it increasingly difficult to stop a second vote.

She continued: “It has some political plausibility, but the longer this goes on, the less you can rely on that line.

“It is very uncertain. A lot of this depends on public opinion in Scotland.

“If support for independence continues to grow, it will become much harder to hold the line for the UK government without significant discontent.”