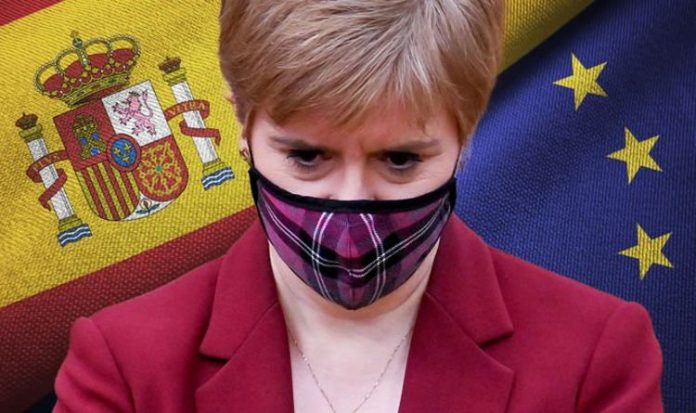 Debate on whether Scotland can join the EU, and how long the country would have to wait, has been fierce in Holyrood. The SNP have raged against the UK’s decision to vote for Brexit, and has called for a second independence referendum with the hope Scotland can return to Brussels as an EU member state. One European country at the centre of the debate is Spain – where its own grappling with Catalonia over independence has raised fears Madrid may block Ms Sturgeon’s EU plans. This was highlighted when Conservative Spanish MEP, Esteban Gonzalez Pons, warned Scotland’s deficit could prove costly.

Last year, he said: “It’s obvious that the Scottish figures are not those the European Union expects from countries that want to be members.

“The figures are far from the European figures – very, very, very far. It would be a problem.”

A week earlier, it had been revealed that Scotland’s deficit stood at £12.6billion, or seven percent of GDP.

When countries apply for EU membership, the bloc’s Copenhagen criteria demands that the deficit remains below three percent of GDP.

The annual government expenditure and revenue Scotland report (GERS) found Scotland’s fiscal deficit for 2019-20 was 8.6 percent of GDP, up from 7.4 percent the previous year.

However, countries can agree to work towards this figure while still entering the EU.

Croatia did this after joining the bloc in 2013 – but did have to agree to austerity measures.

Another boost for Ms Sturgeon came in 2019, when another figure in Madrid said it would not veto Scotland joining the EU after unionists warned Madrid would block Scottish entry.

Spanish Consul General in Edinburgh, Miguel Angel Vecino Quintana confirmed that Spain “will not block Scotland’s entry into the European Union if independence is legally achieved”.

He also had high praise for Ms Sturgeon personally, tipping her as a potential future candidate for European Commission President.

He continued: “Nicola Sturgeon comes across as a genuine person, politically astute and someone whose word can be trusted, whereas Boris Johnson comes across very quickly as someone you can’t trust.