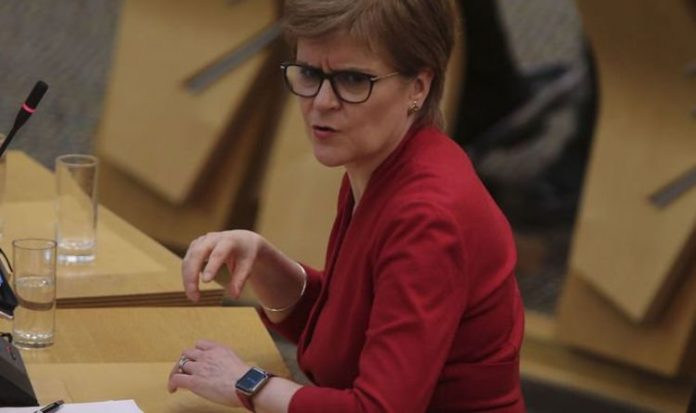 The First Minister is struggling to control her Scottish National Party (SNP) as its separate Westminster entity “dissents”, Express.co.uk was told. It comes after Ms Sturgeon’s former political ally, Alex Salmond, made his long-awaited appearance at a Scottish Parliamentary inquiry last week. He said there was “no doubt” that Scotland’s leader had broken the ministerial code, repeatedly contradicting the series of events Ms Sturgeon had told MSPs.

The ongoing saga, which some claim could thwart independence hopes, stems from 2018 when Mr Salmond was accused of sexual assault – of which he was cleared of all charges – following Ms Sturgeon’s request for new government policies on sexual harassment.

And while the argument is mostly focused between Ms Sturgeon and Mr Salmond, it has quickly trickled into the wider SNP.

The party has seen a string of high-profile dismissals, most notably the influential SNP Westminster members, Joanna Cherry QC and Neale Hanvey.

The SNP is split between its native Holyrood in Scotland and Westminster in England, where it has the most seats in the former, and 47 out of a possible 59 in the latter.

Nicola Sturgeon: The politician has become stretched between her Holyrood and Westminster party (Image: GETTY)

Alex Salmond: The former First Minister said there was ‘no doubt’ Sturgeon has broke the code (Image: GETTY)

Its electoral dominance north of the border has thus translated to its being the third largest party in the House of Commons – despite it not being a UK-wide party.

Such a presence in Westminster, Robert Johns, Professor in Politics at Essex University who is an investigator on the Scottish Election Study, told Express.co.uk has made for a party almost separate to its mother outfit.

The fact has left Ms Sturgeon stretched between keeping her own house in order as well as maintaining a hold over a cohort hundreds of miles away.

This has been made more difficult with the Salmond crisis as figures like Ms Cherry are believed to be allies of the former First Minister.

Scotland: Sturgeon is set to appear in court on Wednesday amid the Alex Salmond crisis (Image: GETTY)

As Professor Johns said: “I think it’s the case that there is an element of senior opposition and disgruntlement in the party.

“It’s always complicated by the fact that the SNP have a Westminster Party and a Holyrood Party.

“The Holyrood Party tends to be on balance more loyal, whereas the Westminster Party has become more of a dissenting outfit – there are more dissenting voices there.

“I think the most important thing is that Joanna Cherry, and other figures like her, would like to lead the SNP.

“They have no interest in forming some other party; this is all about who is leading and making politics for the SNP.

“So in that case what we’re seeing in the SNP isn’t really a splinter, it’s just a classic division.”

Ms Sturgeon is set to make her appearance at the Scottish Parliamentary inquiry on Wednesday.

The committee conducting the inquiry is today expected to request a cache of documents that Mr Salmond says proves there was a “malicious” plot against him.

This was something suggested by Mr Salmond in the closing remarks of his six-hour evidence session last week.

According to The Daily Telegraph, the First Minister is believed to have set aside five hours in her diary for her appearance.

Other members now involved in the case are being called on to resign.

The Scottish Conservatives lodged a motion of no confidence in John Swinney, the SNP’s deputy First Minister.

This was after his refusal to hand over the SNP’s legal advice during Mr Salmond’s successful judicial review.

Many have said it will all be a bitter blow to the legitimacy Ms Sturgeon’s independence calls had gained in previous months, and a Survation poll carried out at the weekend was the first in 22 not to give ‘Yes’ a lead.

Scots go to the polls in May in what is still expected to be an SNP majority win.

However, Prof Johns said the crisis could be “damaging” to the SNP’s image in the country.

He said: “It may be that people will be less impressed by the SNP as a political party.”

Others are unsure whether the SNP will be able to secure its goal of a springboard for independence this May.

Robert Tombs, the renowned historian, told Express.co.uk one of the party’s biggest flaws was its belief that it would be able to rejoin the EU as an independent state – something it appears to be relying on.

Scottish independence: More than half of Scots now back an Indyref2 (Image: GETTY)

He said: “It would cost the EU money – at least the Scots would expect to be subsidised by the EU, and the EU is getting more and more reluctant to do that.

“Countries like Spain would not like that idea because it would be an encouragement to the Catalans, because they would say, ‘If the Scots can do it why can’t we?’

“And I would also guess that the EU would hesitate to do something which would seem really to be a seriously unfriendly act towards a major state like Britain, to actually encourage the break-up of another state.

“Could you imagine that happening in other countries around the world? Countries that go to war over things like that. We wouldn’t of course, but you would be risking a real crisis of relations if the EU was seen to be trying to encourage the break-up of the UK.”

Ms Sturgeon has said she will hold a “legal referendum” should her party win the majority they expect in Holyrood in May.

Prime Minister Boris Johnson has repeatedly refused to entertain this idea, saying a much more reasonable date to aim for a second vote would be 2055 – the same number of years that lapsed between the two Brexit votes.