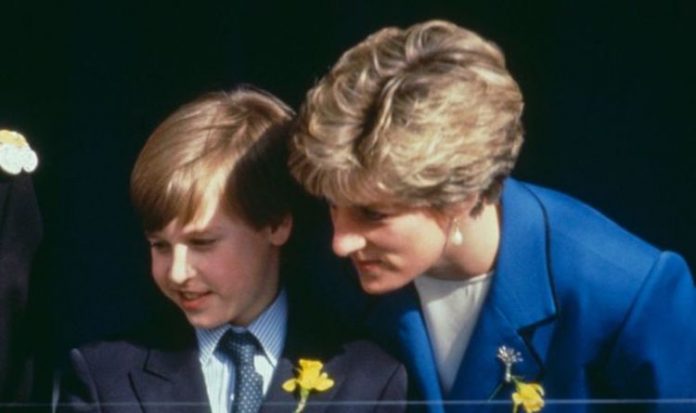 Prince Harry and Meghan Markle departed the UK for North America last year, controversy having since surrounded them. The pair’s interview with US TV host Oprah Winfrey is set to air at the end of this week, with clips from it revealing Harry claiming to have worried about “history repeating itself”. His concern was a reference to his mother, Princess Diana, and her fall from the Royal Family.

Sitting next to Meghan, he said: “I’m just really relieved and happy to be sitting here talking to you with my wife by my side.

“Because I can’t imagine what it must have been like for her [Diana], going through this process by herself all those years ago.

“It’s been unbelievably tough for the two of us, but at least we had each other.”

Diana sadly passed away aged 36 – Harry’s current age – in 1997 in a car crash while being pursued by paparazzi.

Prince Harry: The Duke and Duchess’ interview with Oprah Winfrey will air this week (Image: Youtube/CBS)

It came almost two years after her bombshell interview with Martin Bashir for the BBC’s Panorama show.

Veteran royal reporter and editor Robert Jobson, in his 2006 book, ‘William’s Princess’, wrote about how a young Prince William responded to the interview.

He revealed that William had been forewarned about the programme the day before it went live.

Princess Diana: The royal with William and Harry (Image: GETTY)

Mr Jobson wrote: “Diana had paid a surprise visit at Eton the day before the programme was broadcast.

“She wanted to tell him about it before it was screened and, too late to stop it, she was beginning to regret her decision.

“The next day William was called down to his house master’s study shortly before 8pm, where he watched his mother’s interview in solitude.

“Harry had turned down the chance to join him.

“William watched in dismay as Diana went further than anybody had imagined she would.”

Despite William having bore the weight of his mother and father’s previous public falling-out, Mr Jobson suggested that the interview marked a change in feeling.

He said the young Prince was particularly humiliated this time.

The royal commentator wrote: “William, her ever-dependable little consort, was mortified and hurt by his mother’s words on Panorama.

‘For a while he ignored her, not wanting to continue in his role as her confidant any more.

Martin Bashir: Diana pictured during her tell-all interview with the BBC (Image: GETTY)

Royal tour: Diana pictured during her royal tour of Australia in 1983 (Image: GETTY)

“But within a few weeks, she was forgiven; his love for her was unconditional.

“He could never forsake her, however much her behaviour made him wince.”

Despite this, William continued to be his mother’s confidant.

Mr Jobson continued: “His mother leaned heavily on her eldest son in her times of need – ties when William was still just a little boy.

“He also had a natural knack of spotting what Princess Diana needed.”

He added: “Whenever Diana felt uncertain, William was there for her.”

Meanwhile, Harry and Meghan’s interview with Oprah comes after Buckingham Palace officially announced last month that the pair would not return as working royals.

Their honorary military appointments and royal patronages will be redistributed among working members of the Firm by the Queen.

In a recent interview with comedian and actor James Corden, Harry said that he and Meghan had not walked away from his family in the UK, but were “stepping back rather than stepping down”.

James Corden: Harry appeared in an interview with the actor over the weekend (Image: THE LATE LATE SHOW/FULWELL 73/CBS)

He said his life would always be bound by public service.

This appeared to be an add-on to the pair’s statement following the news they would not return to the Firm.

In the closing lines of the announcement, they said that “service is universal”.

Many viewed it as a snub to the Queen and the Royal Family as a means for social change and justice.

Others claimed it was nothing of the sort; that Meghan and Harry were only outlining that everyone can serve their communities, regardless of their standing in society.