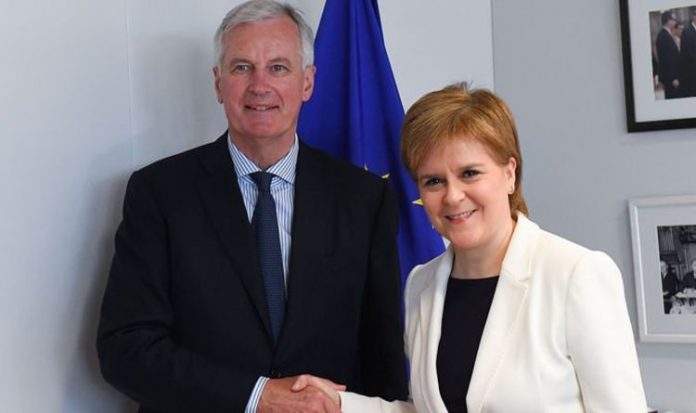 The Brexit transition period concluded on January 1, ending almost half-a-century of eurosceptic frustration. It is a new chapter for the country’s national history that should see the UK return to being an independent sovereign state. Not everyone in the UK has given up on EU membership, though.

The Scottish National Party (SNP) leader believes Scots have been “dragged” out of the bloc against their will.

If Scotland were to become independent, it would border a non-EU country, likely requiring infrastructure and border checks between regions whose communities are deeply intertwined – similar to the problem of the Irish border that severely complicated Brexit talks.

Scotland could also be rejected by Brussels due to its current deficit of seven percent of GDP, unless it adopted a strict austerity programme from the EU as well as potentially accepting the euro.

Moreover, new members can only be allowed into the bloc through a unanimous vote from the existing member states – and Holyrood would undoubtedly ruffle feathers if it were to join.

Spain is struggling with secession demands itself, from Catalonia, which means the country could potentially be put off from supporting a newly independent state.

In an exclusive interview with Express.co.uk, though, German MEP Gunnar Beck claimed the EU will probably “close an eye” and favour Scottish membership in the bloc, in a “tit-for-tat move to break up the UK”.

He said: “The EU was quite clear that if Catalonia split from Spain it would not automatically become an EU member state.

“The situation is slightly different in relation to Scotland.

JUST IN: EU shamed as proof of ‘blunder in vaccine contracts’ exposed

“I think the EU would favour a Scottish application because it would weaken the United Kingdom.

“It breaks up the UK and they wouldn’t mind that. Sort of a tit-for-tat.”

He added: “On the other hand, there is a question how sustainable economically an independent Scotland would be.

“It would be very difficult for Scotland to not join the euro.”

According to economics Professor at Edinburgh Napier University, Piotr Jaworski, the SNP’s plan to achieve independence will almost definitely lead the country to bankruptcy.

He told Express.co.uk: “We will either go bankrupt or we will have to cut our spending.

Prof Jaworski noted: “So if we have a referendum, Scottish people might vote for going out.

Because of the state of its economy, the Professor rejected Mr Beck’s claims, arguing it will be very unlikely Brussels will allow an independent Scotland to join its bloc.

He said: “First of all, countries that have splitting tendencies, such as Spain or Belgium, will never agree.

“You then have got countries like Germany and France… and the question is ‘why should they want Scotland in?’

“I personally don’t know why.

“We don’t have a big economy, we would have problems almost like Greece, in terms of public deficit.

“Is it really in their interest to have another Greece?”