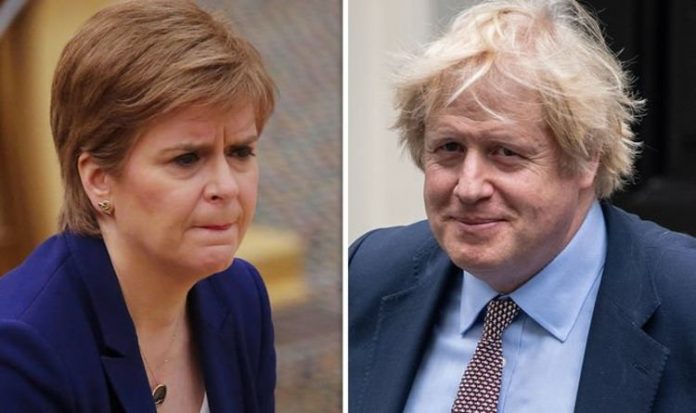 Joanna Cherry QC, one of the Scottish National Party’s most high-profile MPs, has been sacked from a top post at Westminster – in a move that threatens to inflame the civil war between supporters of Scottish First Minister Nicola Sturgeon and her predecessor Alex Salmond. Ms Cherry’s dismissal from the SNP’s front bench team at Westminster was confirmed in a statement from the party’s Westminster leader, Ian Blackford, announcing a reshuffle of his team but making no mention of her removal. This prompted Ms Cherry, whose political victories have included teaming up with businesswoman Gina Miller to overturn Prime Minister Boris Johnson’s suspension of Parliament in the Supreme Court in September 2019, to break the news herself.

The MP for Edinburgh South West wrote on Twitter: “Despite hard work, results and a strong reputation I’ve been sacked today from the SNP’s front bench.

“My constituents and fellow party members who gave me a resounding mandate in recent NEC [the SNP’s national executive committee] elections should rest assured that I will continue to work hard for them.”

Allies of Ms Cherry reacted angrily to her dismissal, claiming she had been sacked because she is seen as a rival and potential successor to Ms Sturgeon if the First Minister is found guilty of covering up sexual harassment allegations against Mr Salmond.

The past few months have brought relations between the rival factions to breaking point.

In a recent report, Scottish political commentator Chris Deerin explained: “The parliamentary inquiry into the Scottish government’s handling of complaints of sexual assault against Mr Salmond has grown ever more dangerous for Sturgeon, due to apparent discrepancies in the evidence given to the committee by her and her husband, SNP chief executive Peter Murrell.

“Salmond is expected to give his own evidence in person and under oath later this month, when it is thought he will accuse Sturgeon of misleading the Scottish Parliament.

“If the First Minister is found to have broken the ministerial code of conduct she may have to resign.

“Cherry, as one of Salmond’s staunchest allies, is not looked upon fondly by the current leadership.”

The row between Ms Cherry and Ms Sturgeon could have dire implications for the SNP as May’s Holyrood elections loom.

David Henig, the UK director of the European Centre for International Economy, wrote on Twitter: “Still a fair chance it is SNP splits that scupper Scottish independence.

JUST IN: EU on brink as ‘poor vaccine distribution’ may be ‘nail in coffin’

“Such things might not affect the majority of voters, but a few points difference could make a big difference in the perception of May’s election results.”

Ms Sturgeon has recently revealed she wants the vote to be in the early part of the next Scottish parliamentary term, following elections to Holyrood in spring 2021.

If the SNP wins a majority, senior figures believe it will give them the mandate to demand a referendum, regardless of what Mr Johnson wants.

Mr Deerin added in his piece for the New Statesman: “Cherry will not go away – it would not be in her nature to give up.

“She is perhaps even likely to intensify her opposition.

“From the back benches she will have plenty of time and freedom to do just that.

“Nicola Sturgeon may just have made her nemesis all the more dangerous.”

Journalist Torcuil Crichton also wrote in the Daily Record: “With the Holyrood investigation to hear in just over a week the former First Minister’s claims that Sturgeon misled parliament over the issue, the SNP is on dangerous ground.

“The sacking of Cherry could just be a tremor before the volcano explodes.”

Mr Salmond is due to give oral evidence in person on February 9 and Ms Sturgeon is scheduled to be the final witness on February 16.

The inquiry is looking at the Scottish Government’s mishandling of complaints of sexual misconduct made against Mr Salmond in 2018 by two female civil servants.

The former First Minister had the exercise set aside in a judicial review, showing it was “tainted by apparent bias”, leaving taxpayers with a £500,000 bill for his legal costs.

He was later charged with sexual assault but cleared on all counts at a trial last March.