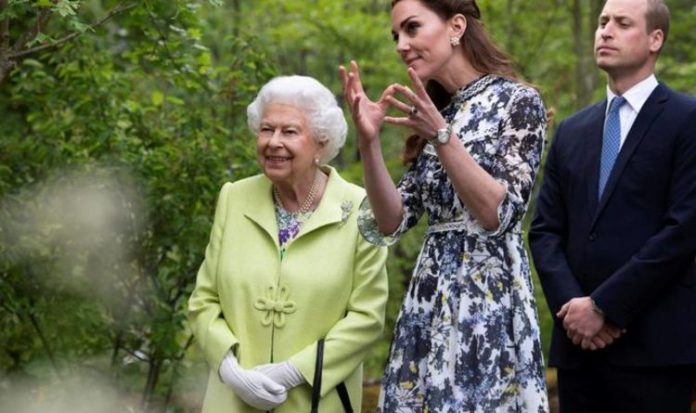 Queen Elizabeth II is known for taking a step back when it comes to teaching protocol and instead allows family members to find their own way. However, it is believed she helped the Duchess of Cambridge assimilate into the family by offering her tips. This was extended to the Middleton family who would have met with courtiers of the royal household and with Prince William to be taught the routines.

Channel 5’s “When the Middleton’s met the Monarchy” explored how Kate was introduced into the family.

Richard Kay, Editor at Large at the Daily Mail, said: “Well clearly everything changed when they became engaged because everything is sort of scaled-up on another level.

“From then she had full-time police protection which made a huge difference in terms of keeping paparazzi at bay.

“And of course, she had to start plans on what life in the royal family was going to be like.”

Tom Quinn, a royal author, added: “The queen certainly played a role in preparing Catherine to marry William but not in any sort of formal sense, she would’ve just given her odd bits of advice just to encourage her.”

Mr Quinn highlighted the Queen rarely runs through everything with family members.

Robert Jobson, another royal author, said: “The reality is the Queen lets members of the Royal Family find their own way and that’s the way she did it.

“There wouldn’t be any sort of blackboard up (saying) this is how you become a royal wife.”

The Duchess of Sussex was found to have changed her name on the birth certificate of her son, Archie Harrison, last week.

Her first two names “Rachel Meghan” were removed, leaving only her title “Her Royal Highness The Duchess of Sussex” on the document.

Theories arose as to why the move was made but a row has erupted as Meghan accuses Buckingham Palace as the reason for the change.