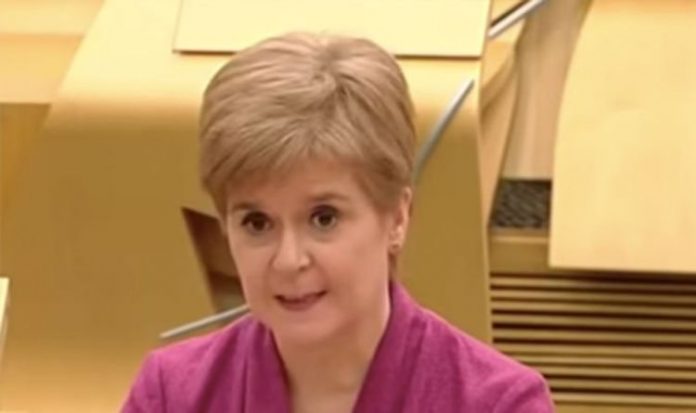 The Scottish independence debate has shown no signs of dying down as First Minister Ms Sturgeon pursues a second referendum on Scotland’s place within the UK. Since losing the 2014 referendum on independence, the likes of Ms Sturgeon have clamoured to have another vote on Scotland’s future, which has been accelerated as a result of the UK’s decision to quit the EU. Former Yes Campaign Chief Dennis Canavan has said this week that a second referendum on Scottish independence could take place next year. He said the Scottish National Party (SNP) should consider “striking while the iron is hot” as polls in recent months point to sustained growth in support for a breakaway from the union.

Numerous surveys in recent months have put Yes ahead, however John Lloyd, contributing editor to the Financial Times and an Associate Fellow of Nuffield College Oxford, has warned against independence.

Mr Lloyd said the SNP has been “irresponsible” as he voiced his concerns for Scotland’s economy outside of the union.

He said wanted to “emphasise the irresponsibility of the SNP if it does win this election, because it will then go into a world where it is going to lose the subsidy from the Treasury, oil prices will remain low, a hard border may come, we have a budget deficit without the subsidy of eight to nine percent, by far the highest in Europe and no currency of our own.

“It would be in a terrible financial situation. The UK as a whole will be in a pretty bad situation, Scotland will be a great deal worse.”

The expert explained that Scotland needed a “national plan”, claiming the country needed “its own currency and a well working central bank”.

“But it would go through a terrible period, a really awful period, if it were to do that now.”

His comments to Tortoise in October came after Ms Surgeon and her party faced pressure following the Government Expenditure and Revenue Scotland (GERS) report, which provoked fury from pro-union campaigners.

Professor Jim Gallagher, a former senior civil servant, said the figures would spark scepticism in the SNP’s plans as North Sea oil revenues have plummeted to about a tenth of what the Yes campaign had predicted in 2014.

He told the Sunday Times: “Scotland starts, structurally, from a weaker place. Its deficit will be even more staggering, probably well over 25 percent of gross domestic product (GDP).

“That’s like borrowing the whole budget of the Scottish Parliament for one year. No small country on its own could sustain that.”

Some have also expressed concerns over independence given that the coronavirus pandemic has left much of the world in an economic rut.

SNP MP Alison Thewliss defended her party’s plans by arguing that “every country on Earth” is feeling the impact of COVID-19.

She explained that the Scottish government has “introduced a range of measures” to support businesses and communities, while “making good progress against the virus”.

The parliamentarian added: “The difference for Scotland is that unlike most countries large and small, we don’t have the full range of economic powers we need to respond to the crisis in a way that’s best for us. Those powers currently lie with the Tory Government.

“We have demanded the Government rethink their rash decision to end support measures at this critical time – including the furlough scheme. Pressing on with these cuts risks a tsunami of lost jobs and livelihoods.

“Given the choice between the chaos of Westminster and a Scottish government working hard to support people, we may well see support for independence increase even further.”

Ms Sturgeon is still pursuing a second independence vote, but one expert told Express.co.uk earlier this year that Prime Minister Boris Johnson could thwart her plans.

Public law expert Professor Aileen McHarg explained: “Assuming a referendum bill is passed by the parliament, there is then a four-week period where both the UK and Scottish law officers have the opportunity to refer it to the Supreme Court for a ruling of whether it’s within competence or not.

“This happened with the Scottish Continuity Bill, the Government referred the bill to the Supreme Court which meant it couldn’t get royal assent and be enforced.

“It took several months for the Supreme Court to hear the case, and in the meantime the EU Withdrawal Act was passed and that reduced the legislative powers of the Scottish government.

“There is a risk that the Government could refer a referendum bill to the Supreme Court and pass legislation to make clear Holyrood cannot call an independence referendum.

“There is no legal barrier to prevent the Government from attempting to do this. Whether or not it is a justifiable course of action would of course be a matter of dispute. I can imagine a lot of people would regard it as illegitimate.”