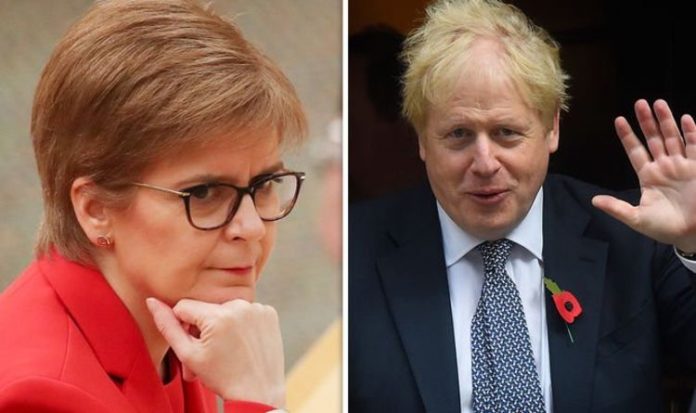 Scottish First Minister Sturgeon has kept open the possibility to hold a second referendum on independence this year. Ms Sturgeon has only recently revealed she wants the vote to be in the early part of the next Scottish parliamentary term, following elections to Holyrood in spring 2021. If the Scottish National Party (SNP) wins a majority, senior figures believe it will give them the mandate to demand a referendum, regardless of what Prime Minister Boris Johnson thinks about it.

So far, since the start of 2020, opinion polls have given “Yes” campaigners a consistent lead over their unionist rivals.

That is a subject that divides hardliners who want a Catalonia-style illegal referendum, and those prepared to play the long game who think the refusal to allow a vote will only fuel support for independence.

As a constitutional stand-off between the Prime Minister and Ms Sturgeon now seems inevitable, in an exclusive interview with Express.co.uk, constitutional historian Vernon Bogdanor brilliantly explained why the SNP has no mandate.

Ms Sturgeon believes Scots have been “dragged” out of the EU against their will, but Prof Bogdanor told Express.co.uk: “The argument about Brexit is not a good one for the nationalists.

“In 2014, it was already known David Cameron was going to hold a referendum two years later and of course, it was perfectly possible that could lead to Brexit.

“So any Scottish voter had that in front of him or her and could make a judgement on that.”

“The unionists would have said, ‘Let’s have another one’. You would get endless referendums.

“You can’t keep having them when the opinion polls are saying the SNP are doing well or when they win an election.

“The argument is bogus.

“If Scotland became independent and the unionists won the election three or four years later… they would ask for another referendum.

“The former Scottish First Minister, Alex Salmond made it absolutely clear in the 2014 referendum campaign that it was a generational question.

Lord Owen noted: “Referendums are rare things and are largely for constitutional issues.

“You don’t have referendums on constitutional issues every five or six years.”