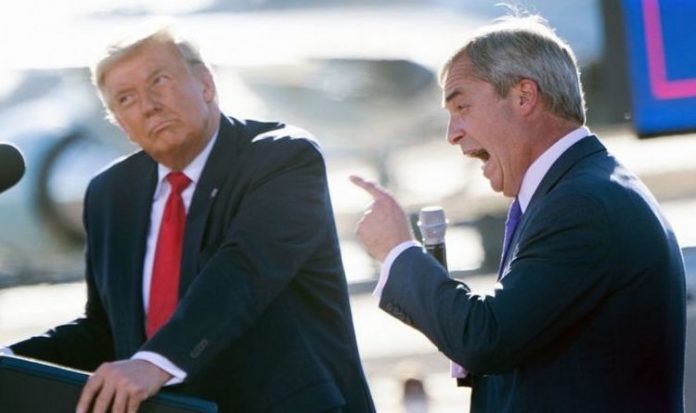 Nigel Farage, a fervent support of Donald Trump, has heavily criticised the new US election rules that allowed Americans to cast their votes by post. He said the method is “very insecure” and is subject to manipulation, meddling and voter fraud. The Brexiteer said: “Wherever there is postal voting it is open to intimidation or weak verification.”

Speaking on Talk Radio this evening he commented on the news Joe Biden had been crowned the winner of the 2020 Presidential election.

He said: “Well if he’s one it fair and square then good luck to him

“The question is has he won it fair and square?

“It was a very unusual election.”

He added: “Here’s the point, had people voted in person on the day Trump would have won by a country mile.”

Mr Farage was challenged by the TalkRadio host for his views, who said postal votes were necessary during a global pandemic.

But the Brexit Party leader continued in his claim that postal voting is an assault on democracy, and enables fraud – something Mr Trump has been claiming, without evidence, for the last few days.

The UK politician said: “What i can tell you for certain, I can say there are massive problems emerging already.”