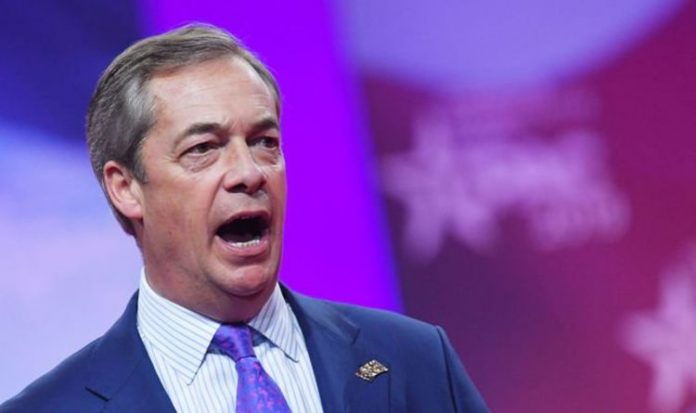 Alexander Downer, who served as Australia’s high commissioner to the UK, lashed out at David Cameron and George Osborne’s “golden era” and “lucrative market” for Chinese investment in Britain. In a savage attack Mr Downer claimed their policy was “superficial” and claimed “the UK was no longer a global geopolitical player, just a trading nation”.

And now the leader of the Brexit Party has issued a warning to the Government to avoid becoming too “dependent” on China.

Sharing an article featuring Mr Downer’s comments, he tweeted: “This shows what happens if you become too dependent on China.

“It is a horrible regime.”

Tensions between the UK and Beijing have escalated over recent weeks over issues such as China’s treatment of the Uyghur community, Hong Kong and the ongoing Huawei debate.

And Mr Downer claimed under President Xi Jinping, China “has become increasingly aggressive and in many respects hostile to the interests of the Western world”.

He argued China has let down Britain’s allies and said: “Worse, it indicated that the UK was no longer a global geopolitical player, just a trading nation.

“Nor was it a policy that was appropriate for a country that is a permanent member of the United Nations Security Council and therefore must carry an unusually heavy obligation to uphold the rules-based international system.

“Britain’s strength in the world is its network of friends and allies.

“A policy towards a rising China which offered nothing more than pecuniary ambition was never going to impress British allies.”

Sam Armstrong, an adviser to the Inter-Parliamentary Alliance on China, said the time for business with China is over.

He added: “Alexander Downer is right, the time for business as usual with China is over.

“His comments will embolden the rule cross-party, international response to China that is emerging in politics across the globe.”

The former solider said the British Government viewed the release of the documents as “an extremely aggressive act – because it is one”.

The document, which also accused Australia of interfering in Chinese sovereignty through critical statements on Taiwan, Hong Kong, the South China Sea and Xinjiang, has stunned Western governments.

Richard McGregor, a senior fellow with the Sydney-based Lowy Institute, has warned other democracies should to take note of Beijing’s behaviour as they could be the next target.

Writing in the FT, he said: “The message is clear. If your media is overly critical, if your think-tanks produce negative reports, if your MPs persist in criticism, if you probe Communist party influence in your community and politics and if you don’t allow Chinese state and private companies into your market, and so on, you will be vulnerable to Beijing’s retribution as well.

“It provides an illuminating road map for a future in which a powerful China demands that its political system be respected and its human rights record stays beyond foreign scrutiny.”