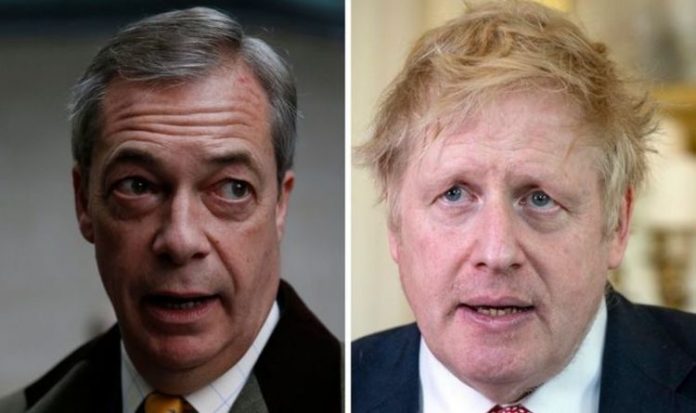 With England set to enter a tier system on December 2, the Brexit Party leader criticised the Prime Minister for how he has failed to show proper leadership during the coronavirus pandemic. Not only has he accused Boris Johnson of failing to show proper leadership but Mr Farage also stated he is at risk of losing crucial Tory voters. He told Express.co.uk: “I think half of the country has made their mind up that they’ve got no competence in the way the Government’s doing things and people are just going to make their own decisions.

“He’s dithered throughout and never acknowledged his mistakes.

“There is a vacuum of leadership politically.

“I think half the country now, either don’t know the rules or frankly couldn’t care less what they are making.

“I think half the country has made their mind up that they’ve got no confidence in the way the Government’s doing things and are just making their own decisions.”

Due to the economic damage caused by the pandemic and the high amount of mortalities across the country, the Brexit Party leader also claimed the Prime Minister is losing the support of the country.

He added: “I think as I say at least half the country now are losing confidence in his leadership, his ability to lead.

“And his particular problem is that the sector that is most affected by this are the ones which tend to vote Conservative.”

“We will do this by returning to a regional tiered approach, saving the toughest measures for the parts of the country where prevalence remains too high.”

The Government is also hoping to roll out a vaccine for certain groups if given final approval.

It is hoped the UK could have a vaccine ready for the wider population by next spring but Mr Farage also expressed his concern over the future of businesses by then.

He added: “Which time how many small businesses will have gone bust?

“How many houses will be repossessed?

“How many people will see their pension prospects wiped out?”

Oxford University’s drug has also been shown to have 70 percent effectiveness.

When administered with half a dose and then a full one, it moved up to 90 percent.

Crucially, the Oxford University drug is valued at £3.34 per dose while Pfizer’s is estimated at £29.47.