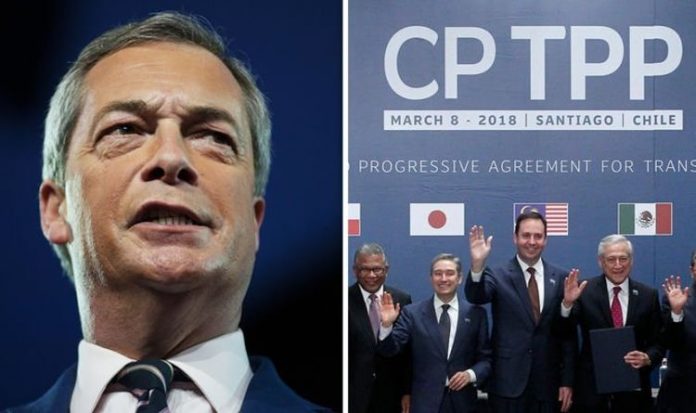 Britain has formally applied to join the Comprehensive and Progressive Agreement for Trans-Pacific Partnership (CPTPP), formerly the TPP, with negotiations set to start later this year. Since leaving the EU, Britain has made clear its desire to join the trade bloc, which removes most tariffs between Australia, Brunei, Canada, Chile, Japan, Malaysia, Mexico, New Zealand, Peru, Singapore and Vietnam. Prime Minister Boris Johnson said in a statement: “One year after our departure from the EU we are forging new partnerships that will bring enormous economic benefits for the people of Britain.”

International Trade Secretary Liz Truss believes membership of the partnership would boost trade that was worth £111billion last year and has been growing eight percent per year since the UK voted to leave the EU in 2016.

Ms Truss argued membership will “complement” existing free trade agreements between the UK and countries including Japan, Canada, Mexico, Chile and Vietnam, which were “rolled over” from previous EU deals.

Speaking to the BBC, Ms Truss declined to say what effect CPTPP membership would have on the UK economy but she insisted the Pacific region was important as a centre of “future growth”.

Brexiteers hailed the move as proving the future success of Global Britain is outside Europe.

“This just confirms the massive opportunities Brexit is already bringing to this country.”

However, Reform UK party leader Nigel Farage, who can largely be credited for Britain’s departure from Brussels, has yet to comment on the move.

The reason behind his silence could be that in 2017, Mr Farage celebrated former US President Donald Trump for removing the US from the TPP.

The TPP was the centrepiece of President Barack Obama’s strategic pivot to Asia.

Before President Trump withdrew the United States, on his third day in office, the TPP was set to become the world’s largest free trade deal, covering 40 percent of the global economy.

For its supporters, such a deal would have expanded US trade and investment abroad, spurred economic growth, lowered consumer prices, and created new jobs, while also advancing US strategic interests in the Asia-Pacific region.

However, its critics, including Mr Trump, saw the deal as likely to accelerate US decline in manufacturing, lower wages, and increase inequality.

JUST IN: EU on brink as ‘poor vaccine distribution’ may be ‘nail in coffin’

Speaking on his LBC show at the time, Mr Farage beamed with delight as he declared the “EU’s prototype for world governance” had taken a massive blow.

He said: “This Trans-Pacific Partnership was modelled and based on the European Union’s single market.

“The idea was the European Union was going to be a prototype for a bigger form of world governance.

“The Clintons were on it, Obama was on it, and Trump’s just reversed it.”

The former LBC host continued: “I generally have always thought that if you remove barriers to trade, you can do so to the mutual benefit of both partners involved – provided they’re roughly equal countries.

“But, the point about these things is they masquerade as trade deals when actually they’re about harmonisation, homogenisation – they’re about playing into the hands of not big business, big giant multi-nationals at the expense of everybody else.”

Mr Farage also praised Mr Trump for being a man of his word and following through on his election promise.

With the US on the sidelines, the remaining TPP countries forged ahead with a new version of the pact, known as the CPTPP, keeping most of the original agreement intact.

Many believe now US President Joe Biden has moved into the Oval Office, the US could soon rejoin.

When asked whether Britain’s entry might make it easier for a future US administration to come back to the partnership, Australian Senator Eric Abetz said: “That is a possibility.

“They seem to have issues with major trade agreements, they want to maintain their flexibility and independence.

“But the more we can engage the UK in world affairs, as a separate entity, the better it will be for everyone.”