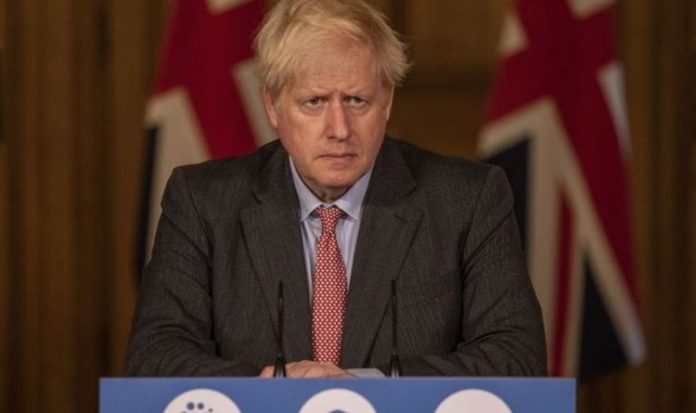 Political lobbyist James Frayne, who is close to Mr Johnson’s chief adviser Dominic Cummings, urged the Government to change its strategy of curfews and social restrictions and focus more on the economic impact of the pandemic. Writing on the Conservative Home website, he called for Number 10 to “downgrade scientists” and also suggested the Government should “unleash” Chancellor Rishi Sunak to be “honest with the public” about the risks to the economy and jobs caused by COVID-19.

Mr Frayne accused ministers of “misunderstanding the character of the English” when they encouraged them to “snitch” on their neighbours if they breached lockdown restrictions.

He said: “There’s only one value the English hold dearer than fairness, and that’s family.

“While they want ludicrous violations of lockdown rules punished in the name of fairness, they’ll also do whatever it takes to protect their families and they believe utterly in the sanctity of the private home.

“The Government has been dicing with political death in recent times.”

He continued: “They’ve appeared to encourage snitching on other families, which will come back to haunt them in calmer times; they’ve left themselves open to putting, say, attending demos ahead of visiting relatives; and they will have made lifetime enemies of middle class parents of students in recent weeks.

“Ministers should remember who the English are: law-abiding; fair-minded; nuclear family-focused; and ultimately liberal.

“Pushing them into civil disobedience to protect their families will end catastrophically badly.

“And, whatever you do, don’t mess with the English Christmas.”

Mr Frayne, whose company Public First, won an £840,000 contract to research public opinion about the Government’s coronavirus policies, claimed “the public has no sense at all of the real state of the economy – and therefore no sense whatever of the trade-offs the Government is making between public health and public finances”.

He said Mr Sunak should “start telling the public some fundamental truths about the need to protect the economy”.

He said: “The public aren’t daft, and they’ll come to accept this. But it’s a message that is going to take time to filter through; it needs to be delivered now.”

Mr Eustice said: “I’ve not seen any projections of four million but certainly we know that there are some 700,000 extra people that are already unemployed as a result of this, and yes you know the projections are, that there are going to be economic impacts.

“It’s for precisely that reason that we are trying to avoid full lockdown.”

Britain’s Office for Budget Responsibility forecast in July that unemployment would peak at 11.9 percent in the final quarter of 2020 under its central economic scenario, equivalent to just over four million people, before averaging 3.5 million in 2021.

In a more negative scenario, unemployment would average four million through 2021.

The Bank of England has forecast that unemployment will rise to around 2.5 million by the end of this year.