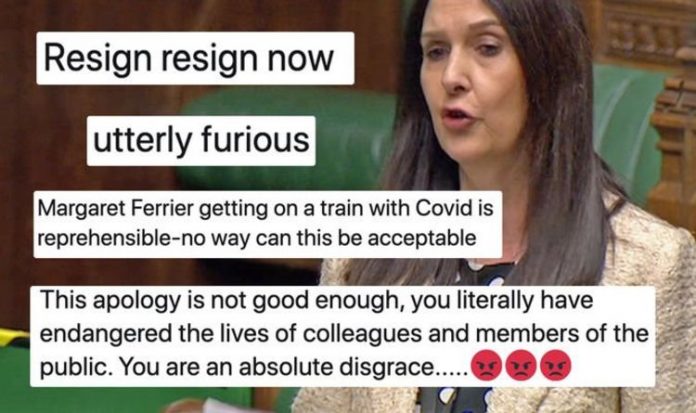 The MP for Rutherglen & Hamilton West travelled to London on Monday when she should have been isolating – as she was awaiting a test result after displaying symptoms on Saturday.

She received her positive result on Monday after giving a speech in the House of Commons.

After receiving her positive result, she breached rules again by travelling back home via public transport on Tuesday morning – without seeking advice.

Ms Ferrier has since been suspended by SNP leader in Westminster Ian Blackford.

While issuing a lengthy apology on social media, Ms Ferrier said she has contacted the police and added there is “no excuse for my actions”.

However, her apology has not gone down well on social media as hundreds demand she resigns from her position.

One person wrote: “If Margaret Ferrier was a Tory MP then Nicola Sturgeon would have called for her to resign 20 times within the past hour.

“However, when it’s one of their own it’s the only time they manage to stay quiet.”

A second person said: “Margaret Ferrier getting on a train with Covid is reprehensible – no way can this be acceptable.”

Someone else simply put it: “Resign. Resign now.”

A fourth person added: “You have to go Margaret Ferrier.

“How the hell do you use a public train AFTER you are #COVID19 positive?

“Bad enough you went out when you were experiencing symptoms!

“What the hell?! This is beyond breaching COVID-19 restrictions.

“I don’t want your apology. I need you to RESIGN.”

One of her own constituents has lashed out at her demanding she resigns and calling for a by-election.

They wrote: “As a constituent of @MargaretFerrier I’m completely & utterly furious over her actions regarding Covid19 she should have known better!

“I therefore no longer trust or want her to represent the constituency of #rutherglenandhamiltonwest & there should be a by-election.”

Another person attacked the MP insisting she had endangered the lives of colleagues and members of the public before dubbing her an “absolute disgrace”.

Ms Ferrier was a vocal critic of Dominic Cummings and urged him to resign after he drove from London to Barnard Castle at the peak of the virus.

And, one person said: “Margaret Ferrier MP seems to have not just broken the rules but gone on a Grand Tour of Britain, hosing the country with Covid-19 as she travelled.

“She has to go. She demanded Cummings should even though he hadn’t done anything wrong. Get her out.”

While someone else said: “The actions revealed about @MargaretFerrier this evening are callous and selfish.

“Given she has demanded the resignation of others so strongly, perhaps it’s time she looked at herself and her untenable position @theSNP”.

Others have called for the Metropolitan Police and Police Scotland to act swiftly, with one person wanting to make a formal complaint.

Leader of the SNP, Nicola Sturgeon, condemned the actions of Ms Ferrier.

“It’s hard to express just how angry I feel on behalf of people across the country making hard sacrifices every day to help beat COVID.

“The rules apply to everyone and they’re in place to keep people safe.

“@Ianblackford_MP is right to suspend the whip.”