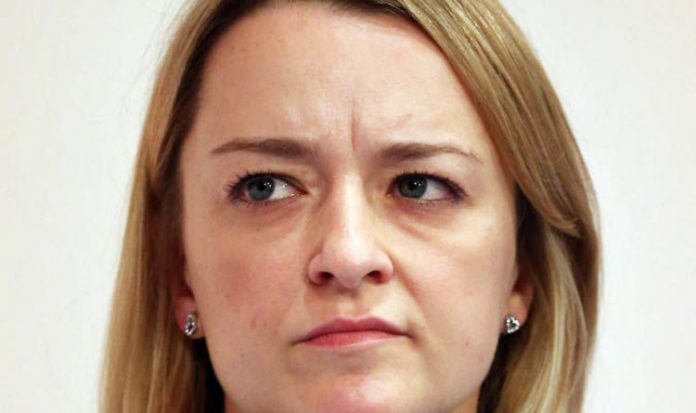 The Labour leader made his gaffe when put on the spot by BBC political editor Laura Kuenssberg about his party’s red lines for supporting any deal agreed between the Government and the EU.

Asked to spell out the tests during the question-and-answer session at the Labour conference, Mr Corbyn listed the wrong areas.

He said: “We have made clear all along that our tests are on access to the market, are on a customs union, are on appropriate regulations that protect jobs, environment and consumer rights, and of course an end to the speculation on the danger of the border between Northern Ireland and the Republic.”

But the BBC journalist told him: “The six tests you set out last year were actually about fair migration, strong collaboration with the EU, protecting security, delivering for the nations and regions, protecting workers’ rights, and having the same benefits as a single market.

“That’s not precisely what you just outlined.”

The Labour leader spluttered in reply: “Well you’ve got the six tests there and you have read them out. You can see exactly what they are.”

Labour’s six tests for supporting a Brexit deal are: One. Does it ensure a strong and collaborative future relationship with the EU? Two. Does it deliver the “exact same benefits” as we currently have as members of the single market and customs union?

Three. Does it ensure the fair management of migration in the interests of the economy and communities? Four.

Does it defend rights and protections and prevent a race to the bottom?

Five. Does it protect national security and our capacity to tackle cross-border crime? Six. Does it deliver for all regions and nations of the UK?

Mr Corbyn later said: “We will challenge this government. If they don’t meet our six tests, we will vote against it, and then we will take it from there.

“The priority, though, isn’t the arcane wording of motions, it’s about jobs and living standards.”